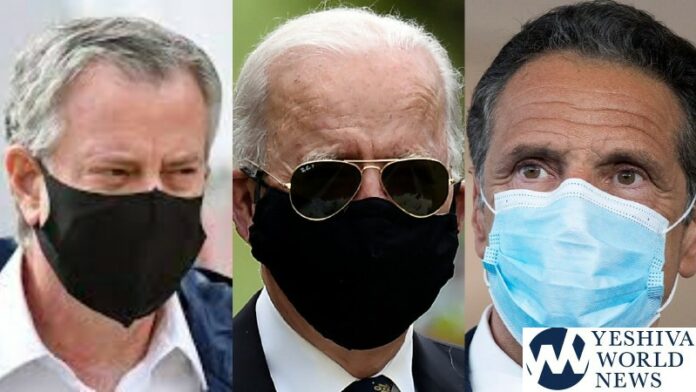 “If we don’t get new vaccine quickly, a new supply of vaccine, we will have to cancel appointments and no longer give shots after Thursday for the remainder of the week at a lot of our sites,” the Democratic mayor said at his daily coronavirus briefing.

After a sluggish start, New York has ramped up the vaccination effort by opening new inoculation sites, including 24-hour vaccine hubs, around the city. De Blasio said 220,000 doses were given out last week and 455,737 have been administered since two vaccines were approved for emergency use last month.

De Blasio said the city could administer 300,000 doses this week if it had enough vaccine.

“The problem is right now we don’t,” he said.

The two vaccines that have been approved for emergency use both require two shot administered several weeks apart for maximum effectiveness. The mayor said 53,000 doses were expected to arrive Tuesday, leaving the city with just 116,000 first doses for the week ahead.

“We will have nothing left to give as of Friday,” he said.

A spokesperson for the mayor said the city has enough vaccine for second doses for some but not all of the people who have had one shot and are waiting for their second.

De Blasio said it’s up to the federal and state governments as well as manufacturers to do “everything they can to get us the maximum supply because we are proving literally every passing day we can reach more and more people.”

He said he was cheered by President-elect Joe Biden’s stated goal of 100 million vaccine doses nationwide in the first 100 days.

“New York City can help lead the way” de Blasio said. “We just need the vaccine to do it.”

Meanwhile, Governor Andrew Cuomo has threatened to sue the federal government if New York State does not receive adequate money to offset the economic costs of the COVID-19 pandemic.

In his news conference presenting the 2022 Fiscal Year Executive Budget, Cuomo said if the federal government does not provide $15 billion to the state in aid, it will pursue litigation.

Under President-elect Joe Biden’s proposed American Rescue Plan, $350 billion will be allocated to state and local governments for COVID-19 relief.

However, it has yet to be determined how that money will be distributed.

Cuomo said a worst case scenario would be New York State receives $6 billion from federal government, but $15 billion would be the “fair” option.