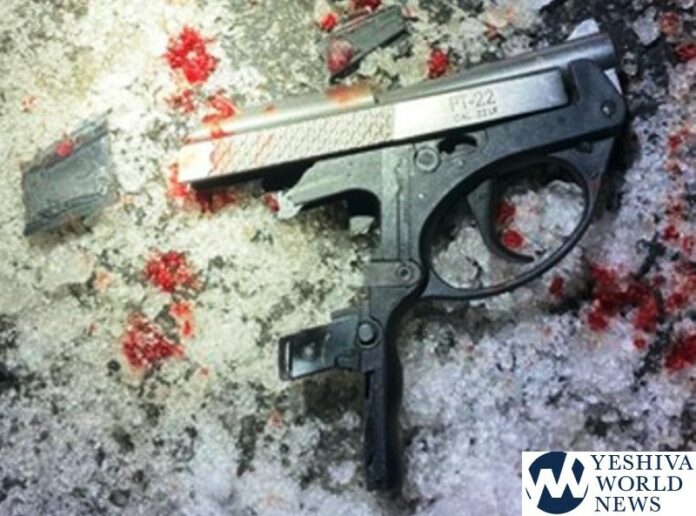 A man who was shot by New York City officers early Sunday had fired at police and sprayed graffiti, the police chief said.

A sergeant and two officers were on patrol when they saw two men spraying graffiti in the Bronx, NYPD Chief of Department Terence Monahan told reporters at a briefing.

The men ran when the officers tried to approach them, Monahan said. After a short chase, one officer caught one of the men and attempted to arrest him. The man reportedly pulled out a gun and fired three shots at police.

All three officers fired back, striking the man “numerous times,” Monahan said. He was taken to a hospital in critical condition. The chief said a semi-automatic handgun was recovered at the scene and appeared to have been shot and damaged in the exchange of gunfire.

None of the officers were hurt. Police were looking for the second man who got away.

Remarks as prepared for Chief of Department Terence Monahan:

Before I begin, I want to remind everyone that the information I’m providing is preliminary and subject to change as the investigation is still ongoing.

At approximately 12:35 a.m. this morning, a sergeant and two police officers who were all in uniform were patrolling in the area of East 153rd Street and Third Avenue in the Bronx.

The officers stopped their vehicle and approached the individuals who both fled on foot.

After a brief foot chase, one of the officers was able to grab one of the suspects.

As the officer struggled with the man in an attempt to arrest him, the suspect pulled out semi-automatic handgun and fired at least three times at the officers.

It was then that all three officers engaged the man returning fire – striking him numerous times.

The man was taken to Lincoln Hospital where he is in critical condition.

A .22 caliber semi-automatic handgun was recovered at the scene of the shooting.

The suspect’s gun does appear to have been shot and damaged during the exchange of gunfire.

The body-worn cameras of all three officers have been viewed by myself and the Department’s Force investigation Division.

As the investigation continues, detectives are still searching for the second suspect who fled.

The officers were all taken to a local hospital to be evaluated and are fortunately uninjured.

Tonight’s shooting underscores the dangers our brave cops face every day as they keep people safe.

Whether they are stopping someone who is making graffiti or responding to a known shooting — there are too many guns on the streets of New York City.