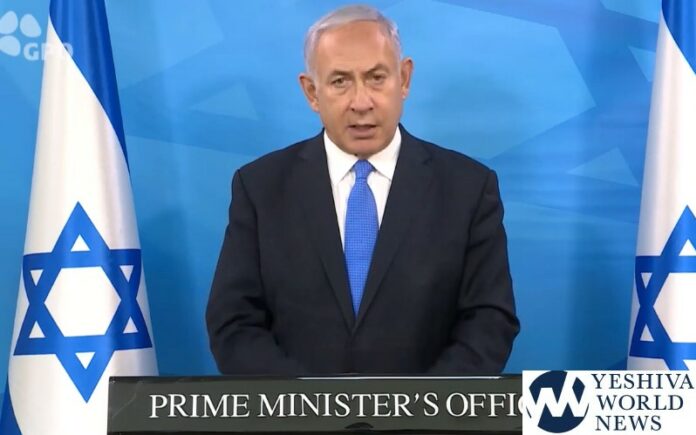 “It has been five days since Hamas brazenly fired rockets at Jerusalem and other Israeli cities in a totally unprovoked attack.

This past week, millions of Israelis were forced into bomb shelters as missiles rained down on our cities. Several Israelis have been killed. Many more have been wounded. You know and I know, no country would tolerate this. Israel will not tolerate this.

Israel has responded forcefully to these attacks and we will continue to respond forcefully until the security of our people is reinstated and restored.

We’ve eliminated dozens of Hamas terrorists and taken out hundreds of terrorist sites, including missile launchers and buildings that Hamas used to plan and perpetrate these attacks.

Two nights ago, Israel also seriously degraded the terror infrastructure of Hamas. We knocked out part of the vast subterranean tunnel network that Hamas uses to attack Israel.

I want to remind the world that in firing on our cities, Hamas is committing a double war crime. They’re targeting our civilians and hiding behind Palestinian civilians, effectively using them as human shields.

As always, Israel is doing everything possible to protect our civilians and keep Palestinian civilians out of harm’s way. We demonstrated this yet again today when we warned civilians to vacate the building used by the Hamas terror intelligence. They vacated the premises before the target was destroyed and that’s why you don’t hear of casualties from these collapsing terror towers because we take special care to avoid these civilian casualties, exactly the opposite of Hamas.

Defeating Hamas does not only serve Israel’s interest, it serves the interests of all those who seek peace, stability and security in the Middle East.

No one should have any equivocation about the choice that is so clear here and I want to thank President Biden for his clear and unequivocal support. You cannot equate a democracy that values life with a terror organization that glorifies death.

At the same time, we will not allow Jews to take the law into their own hands and attack innocent Arabs, or lynch an innocent Arab; there was one such case, such effort. We will not allow these attacks on innocent Jews or Arabs alike. To tolerate this unacceptable vigilantism and violence is to pave a way to anarchy.

Israel is the Jewish and democratic state, where all our citizens, Jews, Arabs and everyone else, are equal before the law and will receive equal protection from those who enforce the law.

Just as we’ve always done, we will weather this storm and emerge stronger than ever. Thank you.”