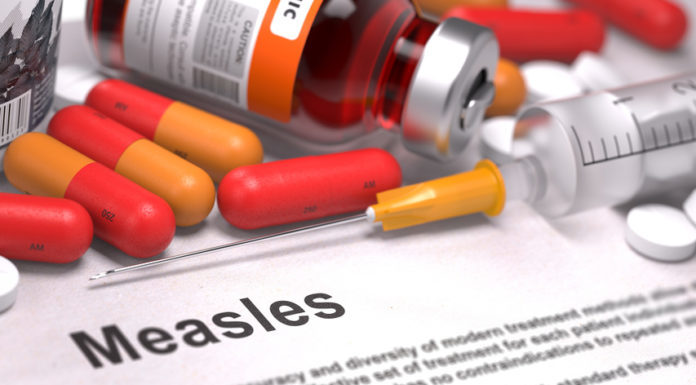 MEASLES OUTBREAK: At Least 7 Cases in Monsey, 6 in Williamsburg – Some Travelled To Israel — WERE NOT VACCINATED

The NYC Health Department today is reporting six individuals with confirmed measles this month in the Orthodox Jewish community in Williamsburg, Brooklyn. The initial case of measles was acquired by a child on a visit to Israel, where a large outbreak of the disease is occurring. The individuals with measles ranged in age from 11 months to 4 years. Five of these children were unvaccinated prior to exposure, including four because vaccination was delayed and one who was too young to have received the vaccine. The sixth child had received one dose of the vaccine prior to exposure but was not yet immune. Complications include one child who was hospitalized with pneumonia and another child with an ear infection. Meanwhile, Health officials in Rockland County on Wednesday said there were seven confirmed cases, and an additional eight suspected cases being investigated involving a mix of adults and children. Rockland officials say five of the sickened can be traced to recent travel to Israel. Two additional cases are from exposure that occurred in the county. Health officials have said anyone at the following locations in Rockland, Westchester and Bergen counties may have been exposed to the measles: Congregation Bais Elazer in Monsey, N.Y. on Oct. 4 Mia’s Reflexology in New City, N.Y. on Oct. 4 Lifetime Gym in Montvale, N.J. on Oct. 5 Wesley Kosher in Monsey N.Y. on Oct. 5 Congregation Borov in Monsey, N.Y. on Oct. 5 and Oct. 6 Costco in Nanuet, N.Y. on Oct. 7 Care 365 in Monsey, N.Y. on Oct. 8 Westchester Medical Center’s Emergency Room in Valhalla, N.Y. on Oct. 11 For those who believe they may have been exposed and have further questions, a toll-free hotline has been established: 1-888-364-4837. The hotline is available Monday through Friday from 9 a.m. to 5 p.m. To increase awareness about measles, the NYC Health Department will hold a meeting in Williamsburg with rabbis and elected officials tomorrow, place ads in local newspapers and distribute posters to health care providers. The first case in Rockland County of international travel was in late September, and two more cases due to separate international travelers in early October are leading to more potential cases of measles among non-immune residents. County health officials offered a free vaccine to residents who had been exposed on Oct. 11. Now they’re offering two more chances for a free vaccine. “As we see more cases there is the potential for further exposure,” said Rockland County Commissioner of Health Dr. Patricia Schnabel Ruppert. “The Rockland County Department of Health continues to investigate these cases and will keep residents informed of any updates. I recommend that residents make sure they and their families are up-to-date on their measles vaccinations.” Measles is highly contagious, so anyone who is not protected against measles is at risk of getting the disease. People who are unvaccinated risk getting infected with measles and spreading it to others, and they may spread measles to people who cannot get vaccinated because they are too young or have specific health conditions. Individuals are considered protected or immune to measles if: • they were born before 1957 • have received two doses of measles, mumps, rubella (MMR) vaccine • have had measles confirmed by a health care provider • or have a lab test confirming immunity Symptoms include a fever, rash, … Continue reading MEASLES OUTBREAK: At Least 7 Cases in Monsey, 6 in Williamsburg – Some Travelled To Israel — WERE NOT VACCINATED