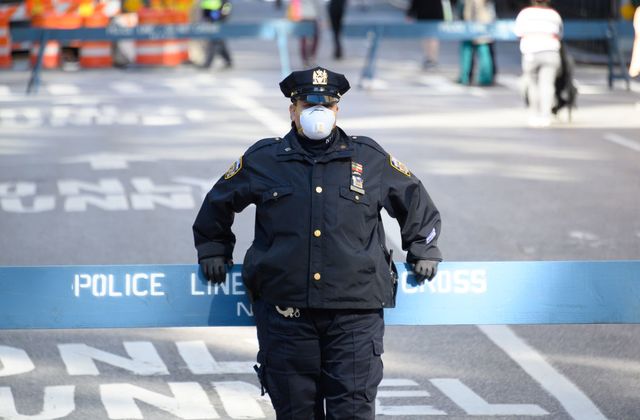 The New York Police Department, criticized over instances of harsh social distancing enforcement, will step back from ticketing people for gathering in small clusters or for failing to wear a mask, Mayor Bill de Blasio said Friday.

The police will continue to disperse large gatherings that are most likely to present a risk of spreading the coronavirus, de Blasio said. “But we’re not going to have the NYPD focus on, you know, two people together or three people together,” he said. “We’re going to focus on when it starts to be more than a handful of people. And we’re not going to be having the NYPD enforcing on face coverings.”

Videos that have circulated on social media in recent days have shown officers punching a man in the head as he lay pinned to a sidewalk and arresting a young mother in a confrontation over a face covering in a subway station.

De Blasio has said that most New Yorkers are following guidelines banning gatherings and requiring face coverings in public.

Here are other coronavirus developments in New York:

BACK TO THE BEACH

After two months of strict limits on business and social distancing, Gov. Andrew Cuomo welcomed the first loosening of restrictions in many parts of the state Friday and announced that beaches would be allowed to open in time for the Memorial Day weekend.

State and municipal beaches throughout the state will be allowed to open the Friday before the holiday, but with limits, the Democrat said.

Capacity will be limited to no more than 50 percent of normal, with parking limited to trim crowds. Group activities will not be allowed. Picnic areas and playgrounds will stay closed. Employees need to wear masks.

It will be up to local governments, Cuomo said, to decide whether to allow municipal beaches to reopen. If they do, they must follow the state’s rules.

“If there is a problem, and the locals do not enforce those regulations, we will close those beaches,” Cuomo said.

Beaches in New Jersey and Connecticut will also be open for the holiday weekend, and Cuomo said part of the rationale for reopening was to prevent New Yorkers from flocking to those states as the weather warms.

Starting Friday, construction and manufacturing businesses will reopen in many rural parts of New York and some upstate cities. Retail businesses can open, too, but only for goods to be picked up quickly, not for in-store shopping.

Cuomo cautioned, though, that employers need to protect workers by supplying masks and limiting congregation of workers. And he said the limited steps the state is taking to reopen would be reversed immediately if infection rates start to rise.

“Watch what happens to the infection rate, testing rate, hospitalization rate. If those numbers start to move, slow down on the activity level.”

New York City will spend $55 million to provide 74,000 free air conditioners to low-income older adults who may be cooped up inside their apartments all summer because of the coronavirus pandemic, de Blasio said Friday.

“Knowing that low-income seniors are the most vulnerable, we’re going to start an initiative right away to get them air conditioners,” de Blasio said.

Other measures aimed at helping New Yorkers survive summer in the era of social distancing will include setting up air-conditioned cooling centers in facilities such as gyms and libraries and opening fire hydrants safely.

“This is all about protecting New Yorkers and helping them through the summer,” de Blasio said.

While parts of upstate New York began a partial reopening on Friday, Cuomo has said that New York City will not begin reopening until mid-June at the earliest.

No plans have been announced to open city-run beaches or public swimming pools, and other places where New Yorkers go to escape the heat such as movie theaters and shopping centers may remain closed for weeks or months.