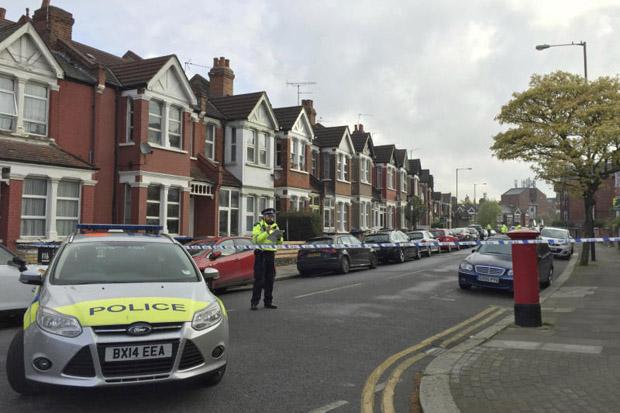 British police said Friday they had disrupted an active terror plot with raids in London and southeastern England. One woman was shot and seriously wounded as heavily armed counterterrorism officers stormed a house in a residential London street.

Six suspects were arrested on terrorism-related charges, police said. The injured woman, who is in her 20s, was in serious but stable condition in a hospital.

The woman, whose name hasn’t been released, was under police guard but had not been arrested because of her condition, police said.

Armed officers fired CS gas into the house in the Willesden area of northwest London, which had been under observation as part of an anti-terrorism investigation, Metropolitan Police Deputy Assistant Commissioner Neil Basu said. He didn’t give details of how the woman was shot.

In footage shot by a witness, what sounds like several shots ring out as police surround the house.

Neighbor Maxine McKenzie said she saw “a lot of frenetic police activity” and a woman being taken out of the house on a stretcher.

“She was sitting upright and had oxygen on — I couldn’t tell if she was conscious or unconscious,” McKenzie said.

Police said the raids weren’t connected to an arrest by counterterrorism police near Parliament on Thursday afternoon. A man was detained near the Houses Parliament and the prime minister’s office in Downing Street while allegedly carrying large knives in a backpack. The 27-year-old suspect, who hasn’t been identified, had been under police surveillance.

He was arrested yards from where an attacker drove an SUV into pedestrians on Westminster Bridge on March 22, killing four, before fatally stabbing a police officer inside Parliament’s gates.

Basu said the Willesden raid disrupted an ongoing plot, but did not elaborate.

In both the Willesden and Parliament incidents, “we have contained the threat that they posed,” Basu said.

Counterterrorism police say 13 potential attacks have been foiled in the last four years. Police and security services say they face a challenge monitoring hundreds of people of interest, including Britons who went to join IS militants in Iraq and Syria and have returned.

Basu, Britain’s senior coordinator for counterterrorism policing, said there had been “increased activity to combat terrorism over the last two years,” with police “making arrests on a near-daily basis.”

In 2016, British police arrested 260 people on suspicion of terrorism offenses, 96 of whom were charged

In Thursday’s raids, a 20-year old woman and a 16-year-old boy were arrested at the address where the woman was shot, as was a 20-year-old man nearby. A man and a woman, both aged 28, were arrested when they returned to the house later.

A 43-year-old woman in Kent county, southeast of London, was also arrested.

Police said the suspects were being held on suspicion of preparation of terrorist acts. They were being questioned but had not been charged.

Ryan O’Donnell, who saw the Willesden raid, said it was “a bit shocking” to see “police wearing big gas masks and holding guns and stuff.”

“Things are pretty much always going on around northwest London, something criminal, so I didn’t think it was terrorism at the time,” he said. “I thought maybe it is guns or something, or drugs or something. But (it) makes sense why they needed such a force.”