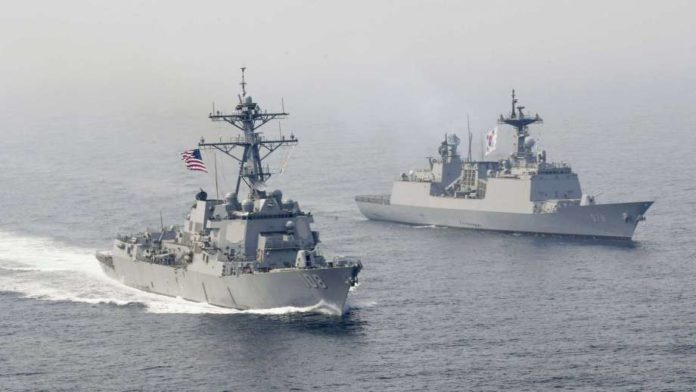 North Korea may already be able to strike its U.S.-allied neighbors with a nuclear-tipped missile. It could develop the capability to target the U.S. mainland by the end of President Donald Trump’s first term.

Tillerson’s goals Friday were two-fold: Stricter global enforcement of existing sanctions on North Korea and strengthening the international resolve on North Korea so it eventually disarms. He dangled the possibility of counteracting “North Korean aggression with military action if necessary,” a threat Trump administration officials had been unusually vocal in making until recent days.

“Failing to act now on the most pressing security issue in the world may bring catastrophic consequences,” Tillerson said.

Tensions on and around the divided Korean Peninsula are running high. Hoping to deter North Korea from more nuclear and missile testing, the U.S. has sent a group of American warships led by an aircraft carrier to the region. North Korea this week conducted large-scale, live-fire exercises on its eastern coast.

China’s Wang warned that “use of force … will only lead to bigger disasters” and urged the U.S. and ally South Korea to end military exercises.

China is North Korea’s main source of food and fuel aid. While it wants the North to end its nuclear weapons program, it is wary of destabilizing a traditional ally whom it fought with in the 1950-53 Korean War.

Tillerson’s told nations to downgrade their diplomatic relations with Pyongyang and increase its financial isolation.

“We must levy new sanctions on DPRK entities and individuals supporting its weapons and missile programs, and tighten those already in place,” he said, using an acronym for the Democratic People’s Republic of Korea. He said the U.S. “would not hesitate” to impose sanctions on non-American companies helping the North and described China as having “unique” economic leverage.

In an interview Thursday, Tillerson said Beijing has threatened to impose sanctions on North Korea if it conducts further nuclear tests. The North conducted two last year and satellite imagery in recent weeks has suggested another could be coming.

Talking to reporters, he repeated a proposal for North Korea to suspend its nuclear and missile activities in exchange for a suspension of large-scale U.S.-South Korea military exercises.

In February, China said it was suspending for the rest of the year coal imports that are an important revenue source for North Korea. Beijing said that was to adhere to the latest in a series of Security Council resolutions aimed at curbing the North’s nuclear and missile programs. Other Chinese economic activity with North Korea remains robust.

China is eager to see a resumption of negotiations. Six-nation talks with North Korea on its nuclear program, hosted by Beijing, stalled in 2008. The Obama administration attempted to resurrect them in 2012, but a deal to provide food aid in exchange for a nuclear freeze soon collapsed.

“What is crucial today is to resume the talks,” Wang told reporters.

North Korea says it needs nuclear weapons because of the “hostile” policy of the U.S. toward it, and has threatened nuclear strikes if there is war. It complained this week that the Security Council rejected its request last month to discuss the U.S.-South Korea military exercises it says are a rehearsal for invasion.

The U.S. is currently president of the 15-member Security Council. Although South Korea is not currently on the council it will also address Friday’s meeting. As of late Thursday, North Korea had not requested to speak.