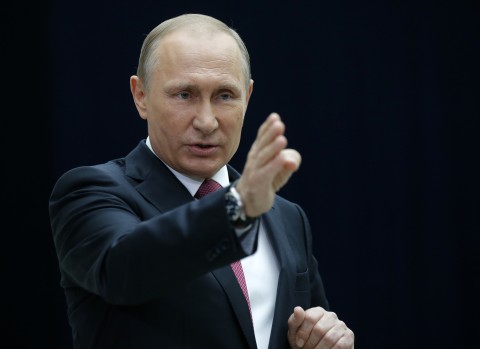 In a sarcastic outburst, Russian President Vladimir Putin on Thursday scoffed at former FBI director James Comey’s disclosure of his conversations with President Donald Trump, saying the move has made Comey eligible for political asylum in Russia.

Putin, speaking in a live call-in show that lasted four hours, likened Comey to NSA contractor Edward Snowden, who has been living in Russia since being granted asylum in 2013.

“It looks weird when the chief of a security agency records his conversation with the commander-in-chief and then hands it over to media via his friend,” Putin said. “What’s the difference then between the FBI director and Mr. Snowden? In that case, he’s more of a rights campaigner defending a certain position than the security agency chief.”

On an acerbic note, he added that if Comey “faces some sort of persecution in connection with that, we are ready to offer political asylum in Russia to him as well.”

The remarks reflected Putin’s annoyance with the congressional and FBI investigations into links between Trump campaign officials and Russia, which have haunted the White House, shattering Moscow’s hopes for improving ties with Washington.

The Russian president reaffirmed his denial of meddling in the U.S. election, saying that Russia has openly expressed its views and hasn’t engaged in any covert activities.

He also attempted to turn the tables on the U.S., saying it has sought to influence Russian elections by funding NGOs as part of its aspirations for global domination.

“Turn a globe and point your finger anywhere, you will find American interests and interference there,” he said.

On a conciliatory note, Putin added that Russia still hopes for normalization of ties with the U.S.

He said Moscow and Washington could cooperate in efforts to prevent the proliferation of weapons of mass destruction and pool efforts to tackle the North Korean nuclear and missile problem.

He said the two countries could also cooperate in dealing with global poverty and efforts to prevent climate change, adding that Moscow also hopes that the U.S. could play a “constructive role” in helping settle the Ukrainian crisis.

During a tightly choreographed marathon TV show, an annual affair that lasts hours, Putin said that Russia has climbed out of recession despite continuing Western sanctions, adding that the restrictions have forced the country to “switch on our brains” to reduce dependence on energy exports.

He deplored the U.S. Senate’s decision Wednesday to impose new sanctions on Russia as a reflection of Western efforts to “contain” Russia, but insisted that the measures have only made the country stronger.

The Republican-led Senate voted Wednesday to punish Moscow for interfering in the 2016 election by approving a wide-ranging package of sanctions that target key sectors of Russia’s economy and individuals who carried out cyberattacks.

The Senate bill follows up on several rounds of other sanctions imposed by the United States and the European Union over Russia’s annexation of Ukraine’s Crimean Peninsula and its support for pro-Russia insurgents in eastern Ukraine.

Putin argued that Russia has done nothing to warrant the Senate’s move, calling it an “evidence of a continuing internal political struggle in the U.S.”

The Russian leader claimed that the “crisis is over,” pointing at modest economic growth over the past nine months, low inflation and rising currency reserves.

He recognized, however, that people’s incomes have fallen and 13.5 percent of Russians now live below the poverty line, currently equivalent to $170 per month.

Most of the questions during the show were about low salaries, decrepit housing, potholed roads, failing health care and other social problems.

As in the past, Putin chided regional authorities for failing to provide due care for people and ordered them to quickly fix the flaws. Even before the show ended, local officials rushed to report that they are looking into the problems.

Asked about a wave of protests across Russia, Putin said he was “prepared to talk with everyone who genuinely wants to improve people’s lives and solve the country’s problems,” but dismissed unnamed opposition leaders for “exploiting the problems instead of offering solutions.”

Navalny was detained outside his home in Moscow before he could join the protest and later sentenced to 30 days in jail for staging an unsanctioned rally. More than 1,750 have been detained across Russia, and scores have been sentenced to jail terms and fines.

The 41-year-old Navalny announced last December that he would run for president in 2018, vowing to appeal a conviction that bars him from running.

During the call-in show, Putin remained tight-lipped about his own plans.

The 64-year-old Russian leader is widely expected to seek another six-year term in the March 2018 vote, but he hasn’t declared his intentions. Putin served two presidential terms in 2000-2008 before shifting into the prime minister’s seat for four years because of term limits. He was re-elected in 2012.

Asked if he was grooming a successor, Putin answered that he has some personal preferences, but it’s up to the voters to decide who will be Russia’s next leader. He similarly dodged a question if the annual show would be the last one with him.

Putin offered a glimpse into his closely guarded private life, saying he has two grandchildren whose privacy he wants to respect.

Putin, who in 2013 announced on state television that he was divorcing his wife, has two daughters in their early 30s who haven’t been seen in public for years and became the subject of rumors. One of Putin’s daughters was reported to be in charge of a lucrative project to build a Silicon Valley-like community under the auspices of Moscow State University.

Putin said during the show that both of his daughters live in Moscow and “work in science and education.” He said one of his grandchildren goes to pre-school and the other, a boy, has just been born. He said he doesn’t want to give details about his family for fear of hurting their privacy.