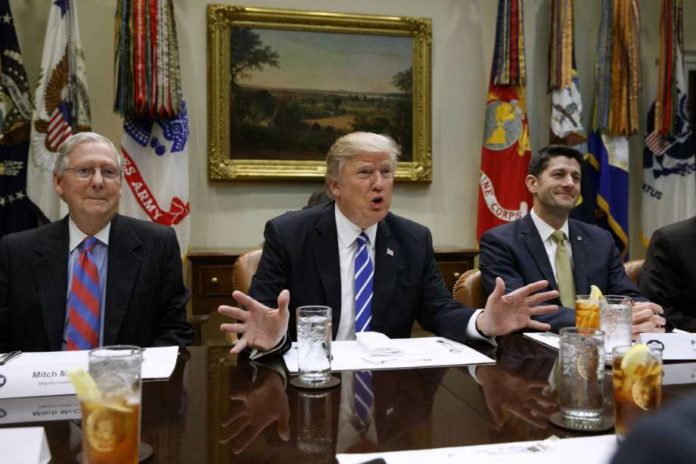 That political reality has come into sharper focus in recent days as Republicans strain to pass high-stakes legislation revamping the nation’s health care law. While the president and the GOP are ostensibly on the same side — each has promised to overhaul the current health care law — their tactics have at times been strikingly at odds.

Faced with possible defections from a small group of senators, including Nevada’s Dean Heller, GOP leaders have been quietly working behind the scenes to tweak the legislation to meet their demands. Trump allies have taken a more heavy-handed approach: A pro-Trump group announced plans to run digital and television ads against Heller, an eyebrow-raising friendly-fire attack against a lawmaker whose tough re-election battle will be crucial to maintaining the party’s Senate majority next year.

GOP leaders are privately assuring lawmakers that the party will have their backs in the midterm elections if they take a tough vote in favor of the health care bill. But Trump has shown in recent days that there’s no guarantee his support will be unwavering. Weeks after lavishing praise on House Republicans for passing their own version of the health care plan, he acknowledged Sunday that he had later characterized their bill as “mean.”

“That was my term,” Trump said Sunday on Fox News, confirming remarks he had made privately.

The relationship between Trump and Republicans has always been one of convenience. Trump is a former Democrat who shares few of the conservative principles that have defined the GOP in recent years. Most GOP leaders were lukewarm at best in their support for Trump during last year’s general election, yet his appeal with white working-class voters in places like Pennsylvania, Wisconsin and Michigan helped give Republicans full control of Washington for the first time in more than a decade.

Since Trump’s election, the new president and his party have largely displayed a united front. GOP frustrations with Trump’s frequent — and sometimes bitingly personal — tweets have been papered over by successes like the confirmation of conservative Supreme Court Justice Neil Gorsuch. The snowballing investigations into possible collusion between Trump’s campaign and Russia have been offset by a string of GOP victories in four special elections, most recently in Georgia last week.

But Republicans are still sorting through Trump’s role in the party’s biggest policy debates, including health care and an upcoming push for an overhaul of the nation’s complicated tax system.

At a weekend retreat hosted by billionaire conservative donors Charles and David Koch, Trump’s name was rarely mentioned except when reporters asked participants about the president. And many traditional Republicans make no secret of the fact that they view the president as more of a bystander in the policy process, not the party’s ideological leader.

“What we have seen is that Mitch McConnell and Paul Ryan have filled the void on both strategy and substance,” said Kevin Madden, a Republican strategist who advised Mitt Romney’s 2012 presidential campaign.

McConnell, the Senate majority leader, and Ryan, the House speaker, have publicly betrayed few divisions with Trump. But Ryan was irked when Trump bad-mouthed the House health care bill he vigorously championed. And McConnell, as well as other GOP leaders, is said to believe that the pro-Trump group’s advertising campaign against lawmakers considering voting against the Senate bill is not helpful.

The first volley from America First Policies came late last week in a sharply critical digital attack against Heller. The senator is up for re-election next year in Nevada, one of the few battleground states Democrat Hillary Clinton won in November and a prime pick-up opportunity for Democrats in 2018.

The group says it is also preparing radio and television ads to run ahead of a Senate vote, and will expand to target Kentucky Sen. Rand Paul, Texas Sen. Ted Cruz, Utah Sen. Mike Lee and Wisconsin Sen. Ron Johnson, who have also said they oppose the bill in its current form. The group has said it has at least a $1 million budget for the advertising push, but some Republicans are skeptical and believe the figure is largely a scare tactic aimed at getting wavering lawmakers to change their votes.

For now, Trump himself is largely playing a behind-the-scenes role as Republicans try to rally votes. Spicer said the president spent the weekend calling several senators, including Cruz, Paul and Johnson, as well as West Virginia Sen. Shelley Moore Capito, who hasn’t said which way she would vote.

Texas Sen. John Cornyn, the No. 2 Republican in the Senate, predicted that if a vote were held this week, it would be “close.” Asked whether Trump was doing enough to help the party, Cornyn said with a smile, “We’re trying to hold him back a little bit.”