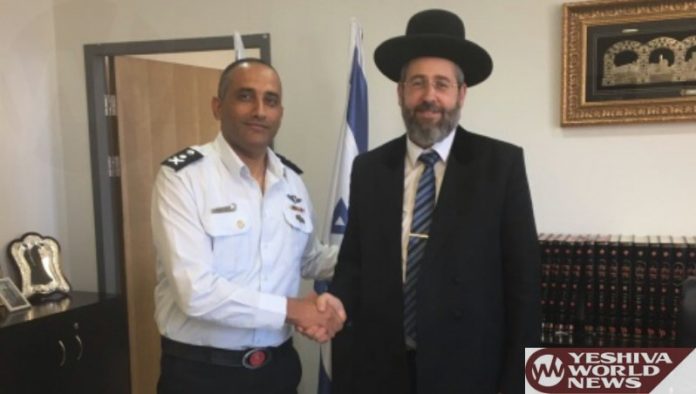 Fire Commissioner Teddy Simchi met on Tuesday 3 Tammuz with Chief Rabbi of Israel Rabbi Dovid Lau Shlita in his office at the Chief Rabbinate of Israel.

The meeting took place following publications relating to religious firemen and the service. During the meeting with the Chief Rabbi, Simchi clarified that, contrary to the publications, he is fully committed to the tradition of Israel, the rabbinate, kashrus and remaining religious if the Fire Service.

During the meeting, the issue of instructing firefighters to shave their beards to wear fire masks during their work was discussed, which led to Rabbi Perl’s resignation as department rav. The Chief Rabbi noted that, as they found a solution for bearded men and gas masks [in the IDF], it is necessary to examine whether a mask can be fitted to firefighters who have beard.

Rav Lau and the commissioner agreed that a committee of experts on firefighting services would be established to examine whether and in what ways firefighters could be provided with special masks that would allow the firefighters to be kept safe during their work, while allowing firefighters not to shave their beard.

The commissioner also stressed that the issues of tradition and kashrus have been accepted and a firefighter will receive the necessary and optimal conditions for maintaining one’s religious lifestyle.

During their meeting, the issue of appointing a new rabbi to the Fire Service was also raised, and the Chief Rabbi noted that a new rabbi should be appointed as soon as possible. At the meeting, it was agreed that only a rabbi holding a Yoreh Yoreh certificate from the Chief Rabbinate of Israel would be appointed to the position, so that it would be possible to ensure that the rabbi elected would possess the necessary knowledge to carry out the complex task of the fire department.