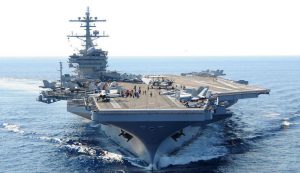 The USS George H.W. Bush, the Nimitz-class aircraft supercarrier is in the area and has set anchor four kilometers from the Port of Haifa. Due to its size, being the largest warship in the world, it cannot dock in the port itself.

Commissioned in 2009, the 333m-long nuclear-powered ship can carry a crew of over 5,000 people, as well as around 90 fighter jets and helicopters. It is considered the world’s largest aircraft carrier and largest warship overall.

According to a Channel 2 News report, details of the vessel’s business in the area are not being released.