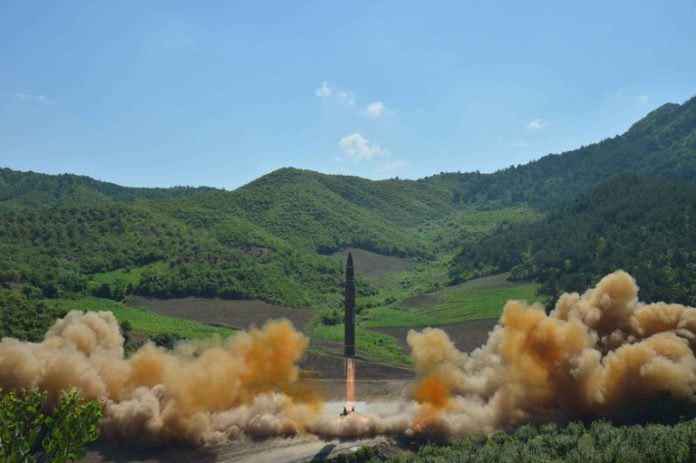 One reason North Korea is the world’s most dire nuclear hotspot is that among the most important players, even allies and semi-allies have different desires and priorities. An enemy to some, a bulwark to others, a frustration to all, with decades of unfinished business coloring the picture in ways unique to each nation.

North Korea’s successful launch of an intercontinental ballistic missile July 4 raised the heat on tensions that have been building for decades, leaving the international community scrambling for an answer to containing Pyongyang’s nuclear ambitions.

Below, Associated Press journalists who cover the standoff from both Koreas, Japan, China and the U.S. explain how each country hopes it is resolved.

The ultimate dream for South Korea is clear: A unified Korean Peninsula, led by Seoul and its values.

The problem, of course, and the source of seven decades of animosity and bloodshed, is that North Korea harbors a mirror image of that ambition.

In the short term, what South Korea wants depends entirely on who you ask.

That group of elderly men in camouflage and combat boots who are burning an effigy of North Korea’s dictator on a Seoul street won’t have the same goals as the North Korea sympathizer who slashed the face of U.S. Ambassador Mark Lippert in 2015.

After a decade of hard-line conservative rule, the current government in Seoul is headed by liberal President Moon Jae-in who wants North Korea to stop conducting nuclear and missile tests so he can begin to implement an engagement policy.

That doesn’t look likely to happen any time soon.

Most average South Koreans support the presence of the 28,500 U.S. troops here, as long as crime isn’t a problem. They look with unease at North Korean provocations but seem to worry far less than the rest of the world about Pyongyang’s threats to annihilate the South.

What they really want is for the economy to soar.

— Foster Klug, AP’s bureau chief in Seoul, has covered the Koreas since 2005.

North Korea has made no secret about what its demands are. Nothing is more important to the North’s ruling regime than its own survival.

To that end, it wants Washington to abandon its “hostile policy” aimed at forcing the country into collapse.

In concrete terms, Pyongyang wants direct talks toward a peace treaty to formally end the 1950-53 Korean War, which was halted after what was supposed to be a temporary armistice. Signing a treaty would also mean formal recognition of North Korea by the U.S. government and entail some sort of a security agreement guaranteeing Washington will not attack the North.

In the interim, the North wants an end to huge military exercises the U.S. holds each year with South Korea.

Pyongyang says it ultimately wants to see the Korean Peninsula reunited. Its often-repeated demand is for Washington to stay out and let Koreans decide their own fate.

Though actually achieving any of these demands would be tremendously difficult, and seems to be growing more difficult every year, North Korea has been quite consistent in what it claims to want.

And as long as its leaders feel vulnerable, it’s not likely to give up much ground.

The top U.S. priority, apart from defending South Korea as a treaty ally, is to rid the Korean peninsula of nuclear weapons – meaning the North’s weapons.

The administration of President George H.W. Bush seemed to set the stage in September 1991 when he announced the withdrawal of all naval and land-based tactical nuclear weapons, including from South Korea. Pyongyang not only persisted in its nuclear ambitions but in recent years has accelerated its program and all but closed the door to denuclearization.

That has put added — even urgent — emphasis on the other U.S. priority: stopping the North from developing a nuclear weapon capable of hitting U.S. soil, while also defending South Korea and Japan, which already are within range of the North’s shorter-range missiles. That is why Washington resists talk by China and Russia of halting military exercises with South Korea in exchange for concessions by the North, or withdrawing any of the approximately 28,500 U.S. troops based permanently on the peninsula.

Washington sees little point in negotiating a formal end to the Korean War, which was halted in 1953 with an armistice rather than a peace treaty, because it sees far greater urgency in the nuclear issue.

As the closest thing to what North Korea might call an ally, China is under greater pressure than any nation to curb the regime’s provocations and set it on a path to a long-term resolution of the standoff. Yet Beijing insists it doesn’t have that kind of influence with Pyongyang, and has largely rejected calls to curtail two-way commerce that accounts for an estimated 90 percent of the North’s foreign trade.

At the same time, Beijing would like to return to the period in the last decade when it received kudos for hosting six-nation talks in which the North’s representatives sat down with the U.S. and others to discuss steps toward ending its nuclear programs in return for incentives.

With no prospects for an immediate return to negotiations, China has instead been pushing for a “dual suspension” in which the North temporarily halts its nuclear and missile tests while South Korea and the U.S. put large-scale war games on hold. That could facilitate talks, calming the situation and preserving the status quo whereby North Korea continues to act as a buffer between China and the pro-U.S. South.

China’s relations with Pyongyang may be in deep freeze, and the North’s actions could spur rivals the U.S. and Japan to responses that could work to China’s disadvantage. But ultimately, the specter of a North Korean collapse is far, far scarier to the rulers in Beijing.

As a staunch American ally, Japan cooperates closely with Washington and backs it in stepping up pressure on North Korea to counter the growing threat from its missile and nuclear programs.

Japan, a non-nuclear state and home to 50,000 American troops, relies on the U.S. “nuclear umbrella” under a bilateral security treaty as a deterrent, and is wary of any escalation in military tensions in the region. It seeks to avoid becoming embroiled in U.S. military actions but is taking a leadership role with the U.S. and South Korea in lobbying other countries, especially China and Russia, to enforce economic sanctions against the North.

Given its proximity to North Korea, Tokyo has sought to exert leverage through diplomacy, such as six-party talks aimed at ending North Korea’s nuclear program, and its own bilateral efforts to get Pyongyang to repatriate Japanese citizens who were abducted by North Korea. More than a dozen Japanese nationals kidnapped and taken to North Korea decades ago to be trained as agents are still believed to be alive, and Prime Minister Shinzo Abe has made their safe return home one of his top priorities.

While an actual attack could bring disaster, the North Korean threat lends Abe leverage in drumming up public support for a stronger military and missile defense systems.