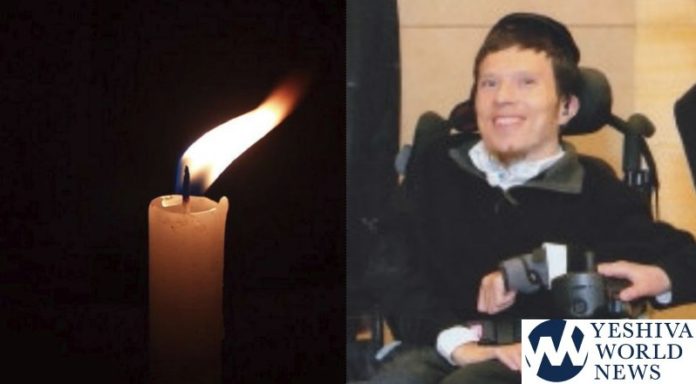 With great sorrow we report the petira of Rephoel Shachar Weissberg Z”L at the age of 37 years old.

Rephoel Shachar Weissberg grew up in Baltimore and learned in Yeshiva Ner Yisroel for High School and Beis Medrash. There he developed a close kesher with his Rebbeim, which he kept up all his years.

At the age of 8 he was diagnosed with a serious illness, which forced him to go through multiple surgeries. At one point the doctors decided that a risky yet necessary surgery had to be performed, and that surgery eventually led to his paralysis. He had practically no movement in his arms or legs. In 2011 Shachar came to Eretz Yisroel for a visit and while there his medical condition deteriorated and he was unable to travel back to America. For the past six years Shachar lived in Yerushalayim, first in Har Choma and then on Rechov Yaffo.

Despite his unbelievably difficult condition, Shachar carried on strong in his Emunah, and persisted on with his learning and Kiyum Hamitzvos. Shachar had different chavrusos, some over the phone and some who came to learn in his house. He was always ready with a vort on the Parsha and constantly wanted to hear Divrei Torah. Many people from a variety of backgrounds came to visit Shachar and all left amazed at his strength of character, his unwavering Emunah, and his upbeat attitude. Those who went with the intention to give chizzuk, left with the feeling of the roles being reversed.

Over the past few weeks Shachar’s condition deteriorated and eventually his lungs failed. Shachar understood his end was coming and accepted his fate with complete Emunah. Hundreds attended his Levaya on short notice this past Tuesday night in Shamgar and the Kevuroh on Har Hamenuchos. His pure Neshama, cleansed with a heavy dose of Yissurim will now receive his deserving spot near the Kisei Hakovod.

May he be a Meilitz Yosher for his friends and family and all of Klal Yisroel.