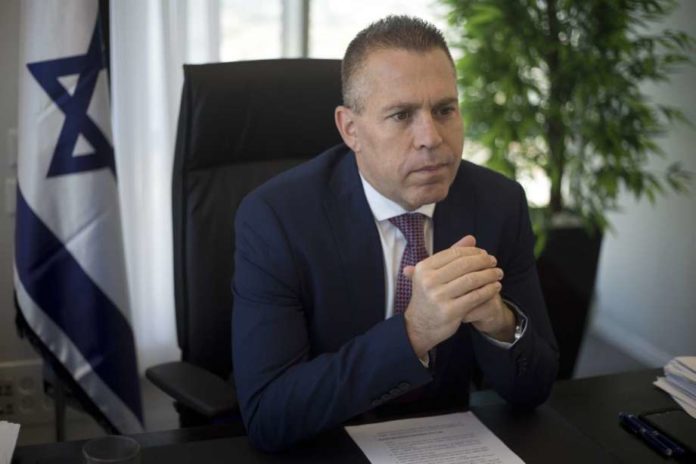 Public Security Minister Gilad Erdan spoke on Monday about the violence in the Arab sector which has reached an unprecedented high recently, saying the Arab society is very very violent, according to a Mako report on Monday. “It’s connected to the fact that a mother can approve her son killing his sister because she goes out with a man whom the family doesn’t approve of.”

Erdan said in an interview on Jerusalem Radio that Arab society “is a very very – and another thousand times – very violent society. In their culture there are many many fights – which here would end with legal prosecution – there they pull out a knife or gun.”

Erdan mentioned the actions that his ministry and the police are carrying out in order to address the crisis of violence in the Arab sector. “We’re trying to minimize historical gaps [in addressing Arab violence] and we’re in a process that hasn’t occurred since the beginning of the state. No minister has ever invested so much in establishing police stations and recruiting police officers who are instructed only to enforce the law. Until I came, there were only three police stations in Arab communities. I established another seven and there are more being planned.”

“It’s impossible to produce results when there is no cooperation of the normative [Arab] society with the police,” Erdan added.

Arab Joint List chairman MK Ayman Odeh responded to Erdan, saying: “Instead of taking responsibility for the safety of all the citizens of the state, Erdan prefers to hide behind racist claims and throw the responsibility on those murdered. The police abandoned the streets to criminal organizations and gangs.”

“The crime in Arab society is not a product of Arab culture but governmental racism,” Odeh continued. “A minister who sees us as enemies and refuses to protect us from criminal organizations – who obtain most of their weapons from the army. Erdan must understand that there’s no room for this dark racism in the year 2019.”

Due to the rising violence and murders in the Arab sector in recent weeks, Arabs have been taking to the streets to protest, saying that countless criminal and shooting incidents occur every day in their communities.

Last week Erdan held an emergency meeting with the police commander, who presented him with new steps to deploy forces in Arab communities as well as new and immediate step to improve security in the sector and deal with the severe increase in homicides and violence.

“The state of crime and violence in Arab society is unfortunately intolerable and dealing with it is our top priority,” Erdan said at the time.