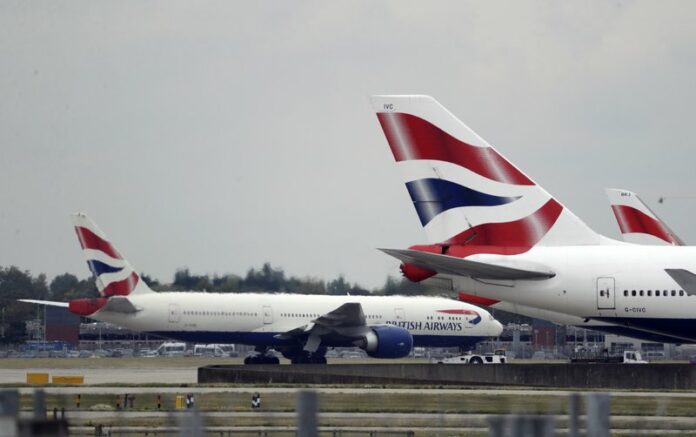 People arriving in the U.K. will have to quarantine themselves for 14 days and could be fined 1,000 pounds ($1,220) if they fail to comply under a plan being announced Friday by the British government.

Home Secretary Priti Patel will set out details of the measures, which have already sparked confusion and criticism from airlines, airports and lockdown-weary Britons wondering whether they will get to take a vacation abroad this summer.

Britain did not close its borders during the worst of the country’s coronavirus outbreak, which has been linked to more than 36,000 deaths in the U.K. It is introducing its quarantine just as many other European countries are starting to open up again.

The British government has previously said the quarantine will start in early June and will apply to arrivals from everywhere except Ireland, which has a longstanding free-movement agreement with the U.K. Ireland is expected to announce similar measures.

There are likely to be exemptions for some travelers, including truckers and medics.

Britons returning from overseas will also have to self-isolate for 14 days under the measures, which will be reviewed every three weeks.

There has been confusion about the U.K. policy, after the government initially said it would not apply to people arriving from France. That prompted a rebuke from the European Union, which wants a coordinated policy across the 27-nation bloc.

Britain later said France would not be exempt.

Airlines have warned that the British move could hobble their efforts to rebuild a business devastated by pandemic-related travel restrictions.

Karen Dee, chief executive of Britain’s Airport Operators Association, said the government had not told airports how the quarantine would be enforced.

“I believe that passengers will be asked to give an address in the U.K. and there will be spot checks and fines for those people, but I don’t know the detail of how that will be implemented,” she told Parliament’s Home Affairs Committee.

Many European nations shut their borders in March as the pandemic took hold, and are now easing those restrictions. But the plans to reopen to foreign visitors are spurring national and regional tensions as the summer tourist season approaches.

Italy, the onetime epicenter of Europe’s pandemic, is opening to European travel on June 3, the same date that it is allowing Italians to move outside their regions for pleasure. But some regions are taking precautions to ensure that the sudden reopening doesn’t create new infection clusters. Sardinia’s governor has suggested he might require visitors to the island to certify they had tested negative for the virus within the past week, or submit to a test on arrival.

The Tuscany regional government says on its website that any visitor from abroad or another Italian region must undergo quarantine for 14 days. It’s unknown if Tuscany, which fills with British and German tourists in summer, will revise that rule as June 3 approaches.

France says it may quarantine people arriving from an area “where the virus is circulating,” but it has not published a list of targeted areas. The French presidency said those coming from EU countries, from Britain and from the passport-free Schengen area will be exempted.

Some European regions and tour operators have called for “tourism corridors” between areas with low rates of the coronavirus. Britain has said it may consider the idea, but Italy has condemned it, fearing it will exclude the country, which has seen more than 32,000 COVID-19 deaths.