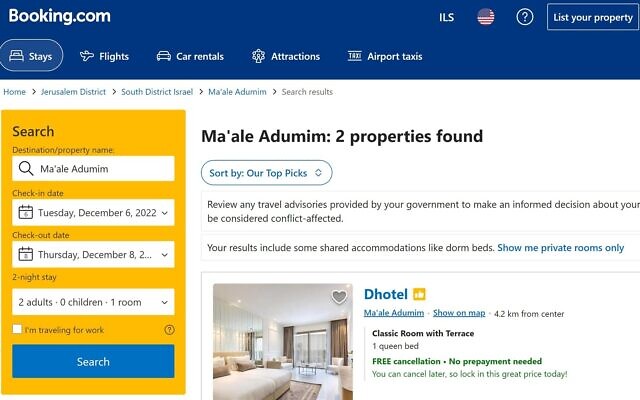 In the wake of pressure from Israel’s Foreign and Tourism Ministries, the global travel reservation site Booking.com considerably toned down the travel warnings it began issuing to listings on sites in Yehudah and Shomron.

The warnings, which were added to the online site on Friday, recommended that customers “review any travel advisories provided by your government” before booking in an area “which may be considered conflict-affected.”

According to a statement by the Israeli Foreign Ministry on Motzei Shabbos, the original warning labeled sites in Yehudah and Shomron as “occupied” and holding a “risk to human rights.”

Prime Minister Yair Lapid responded to the decision by stating, “We thank Booking.com for changing its decision. The State of Israel accomplished an important achievement in the fight against delegitimization.”

Tourism Minister Yoel Razvozov (Yesh Atid) said, “Under the direction of Prime Minister Yair Lapid, together with the Foreign Ministry, we prevented Booking.com from publishing false information against Israel and against Israeli tourism businesses in Yehudah and Shomron. We proved that Israel has the ability to act and win in the political arena and I am sure that we will continue to do so in the future in the face of any attempt to harm us.”