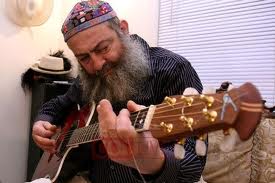 Yosi Piamenta, famed musician who began his career in the 1970’s when he created a rock band with heavy Hasidic and Middle Eastern influences, is currently suffering from the serious illness.

6 years ago, Piamenta and his brother Avi Piamenta collaborated with singer Naftali Kalfa on the Album “Yehyu Leratzon”.

Recently, when Kalfa learned of Yosi’s current medical situation, he composed the song “Yaancha”, which is based on the 20th Psalm. When Naftali went to visit Yosi in New York, they soon found themselves in a familiar setting: a recording studio making music.

This song is produced and arranged by Yosi Piamenta, may he merit a long life until 120!

The song is dedicated to the speedy recovery of “Yoseph ben Genia” (Yosi Piamenta) and all the sick amongst Israel.

The brothers Piamenta first started their careers back in the 70’s when they were the first pioneers of their genre and created a rock band with heavy Hasidic and Middle Eastern influences which swept up the youth of that generation and ours. Since then they have been collaborating with big names in music and have performed all over the world.

Naftali Kalfa has released 2 albums. The first was a joint project with the Piamenta brothers, “Yehyu Leratzon”. The second album, released in 2013, “The Naftali Kalfa Project” is a double album. In it Naftali hosts Yosi Piamenta among others.