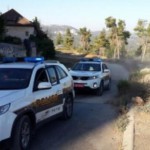 09:36 IL: It is beginning to appear that the murder of the Arab males whose body was found in the Jerusalem Forest is related to an internal family feud or honor killing. While police have not announced a definitive motive, the information being released in the case is pointing in that direction and not a nationalistic revenge killing.

According to a Haaretz report, family members of the dead youth deny this is the case.

In the rioting that resulting in Shuafat earlier in the morning, damage resulting to bus stops and light rail stations. Israel Police nationwide remain on the highest operational alert level following the events of this week.

08:19 IL: Rioting is reported in Shuafat following the report of a kidnapping and the discovery of a burnt body of a male in the Jerusalem Forest. Shuafat residents report “three settlers” pushed an Arab male into a car earlier and drove off.

Amid the statements of eyewitnesses, there are reports the body found in the Jerusalem Forest is that of a male who was killed by Arabs who disapproved of his modern lifestyle and not a revenge killing as Jerusalem Arabs want police to believe.

Earlier, there were reports that three people, possibly Jews, forced an Arab male into a car in the predominately Arab Beit Haninah area of the capital. When police received the call of the apparent kidnapping roadblocks were set up and a chopper was ordered into the air. As per police orders, the Jerusalem light rail will only operate during the morning hours between Mount Herzl and Ammunition Hill. Commuters traveling from Pisgat Ze’ev stations in the northern capital will be redirected to buses.

Police received a report of an Arab male who disappeared early Wednesday morning after going to mosque in Shuafat. It is unclear if the events are connected but it appears the reported kidnapping involves the missing Arab male who left the area mosque. The ISA (Israel Security Agency – Shin Bet) is already involved in the investigation. Police quickly obtained a gag order from the court prohibiting publishing details of the case.

Jerusalem Mayor Nir Barkat called the act “barbaric”, condemning the murder of in no uncertain terms.

Police are not ruling out that the incidents are connected and that the Arab male was abducted and murdered in an act of revenge for the kidnapping murders of Gilad Shaar, Naftali Frenkel and Eyal Yifrach HY”D. the media is reporting many shouts of “deaths to Arabs” were heard during angry protests in Jerusalem on Tuesday, when the terror victims were being laid to rest.

According to foreign media reports, the body found in the forest was discovered less than an hour after the Arab teen was abducted from Shuafat Junction. A Galei Tzahal (Army Radio) report states the Arab was forced into a black car.

On Tuesday night an Arab family complained to police, reporting an attempted kidnapping of a child on a main street in Shuafat. According to the report, 10-year-old Moussa Zalum was walking with his mom and a brother and a car stopped and they tried to pull him into the vehicle. There was a struggle and the child managed to break free and run. The car sped off.