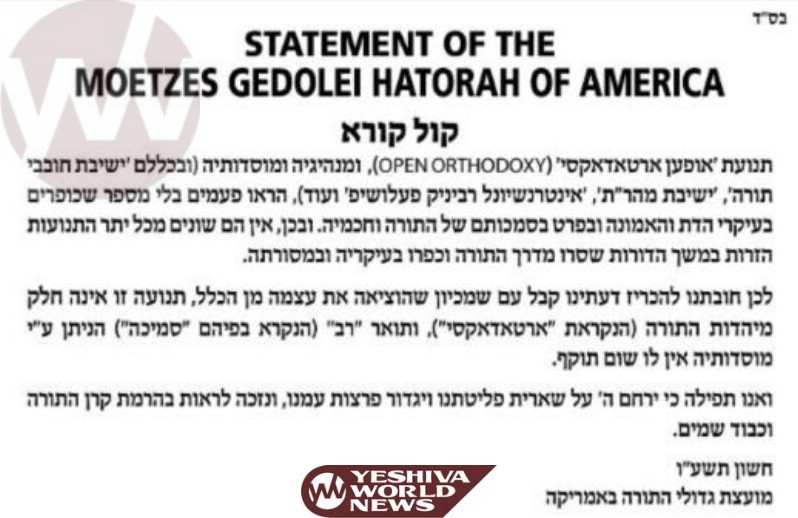 Recent years have seen an effort by various institutions, under the rubric of “Open Orthodoxy,” to claim, as per that chosen name, that their theology and attitude toward Jewish religious law comprise an acceptable expression of what has long been called “Orthodox Judaism.”

The Moetzes Gedolei HaTorah of America, or Council of Torah Sages, which serves as Agudath Israel of America’s highest rabbinic body, has examined statements and positions put forth by representatives of the “Open Orthodox” groups and found that the movement is beyond the pale of Orthodoxy.

To help prevent the Jewish public from being misled on the matter, the Council issued the following statement today:

“OPEN ORTHODOXY,” and its leaders and affiliated entities (including, but not limited to, Yeshivat Chovevei Torah, Yeshivat Maharat, and International Rabbinic Fellowship), have shown countless times that they reject the basic tenets of our faith, particularly the authority of the Torah and its Sages. Accordingly, they are no different than other dissident movements throughout our history that have rejected these basic tenets.

We therefore inform the public that in our considered opinion, “Open Orthodoxy” is not a form of Torah Judaism (Orthodoxy), and that any rabbinic ordination (which they call “semicha”) granted by any of its affiliated entities to their graduates does not confer upon them any rabbinic authority.

May the Almighty have mercy on the remnants of His people and repair all breaches in the walls of the Torah, and may we be worthy to witness the raising of the glory of Hashem and His sacred Torah