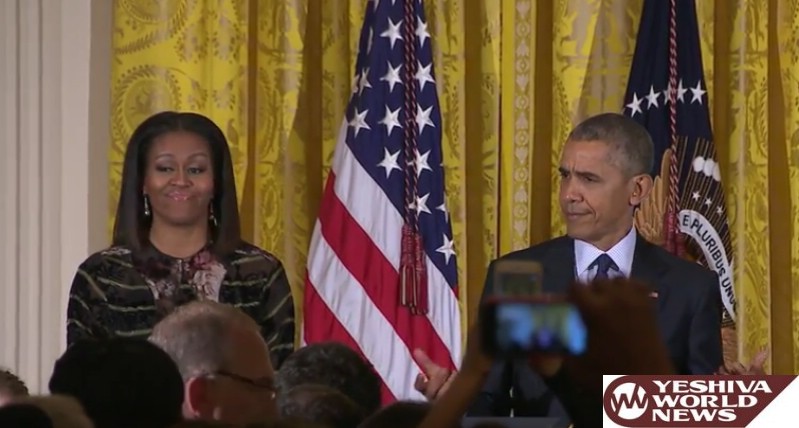 President Barack Obama says Chanukah is a reminder that of all the blessings enjoyed in the U.S., the most meaningful is freedom.

Obama is holding a pair of Chanukah receptions with Jewish leaders and rabbis at the White House.

Obama says the Chanukah story shows that the story of the Jewish people is one of perseverance. He says families putting candles in their windows are embracing the freedom to proudly practice their religion and defending the rights of others to do so.

The president is being joined by relatives of Elie Wiesel, the poet and Holocaust survivor who died in June.

He is also being joined by relatives of Shimon Peres. The former Israeli president died in September.

As in recent years, the food for this afternoon’s event is under the strict rabbinical supervision of Rabbi Levi Shemtov, Lubavitch Center of Washington (Chabad), in cooperation with the Rabbinical Council of Greater Washington.

REMARKS BY THE PRESIDENT AT AFTERNOON HANUKKAH RECEPTION:

THE PRESIDENT: Hello, everybody! (Applause.) Hello, everybody. Welcome to the White House. Michelle and I want to be the first to wish all of you a happy Hanukkah. I figure we’ve got to be first because we’re about 10 days early. (Laughter.)

We have some very special guests in the house to share some latkes with, so I want to call them out. We are, first of all, honored to be joined by Rabbi Steven Exler, the outstanding senior rabbi of the Hebrew Institute of Riverdale. (Applause.) He also happens to be Secretary Jack Lew’s rabbi. (Laughter.) He taught my Director of Jewish Outreach, Chanan Weissman. So he obviously is doing something right. Also, let’s give it up for Koleinu, whose sound might be the most beautiful thing to come out of Princeton since the woman standing next to me. (Applause.) That was a good one, right?

MRS. OBAMA: That was a good one. (Laughter.)

THE PRESIDENT: Today in the White House, as you will soon do in your homes, we recall Hanukkah’s many lessons: How a small group can make a big difference. That’s the story of the Maccabees’ unlikely military victory, and of great moral movements around the globe and across time. How a little bit can go a long way, like the small measure of oil that outlasted every expectation. It reminds us that even when our resources seem limited, our faith can help us make the most of what little we have. The small State of Israel and the relatively small Jewish population of this country have punched far above their weight in their contributions to the world. So the Festival of Lights is also a reminder of how Isaiah saw the Jewish people, as a light unto the nations.

This is the season that we appreciate the many miracles, large and small, that have graced our lives throughout generations, and to recognize that the most meaningful among them is our freedom. The first chapter of the Hanukkah story was written 22 centuries ago, when rulers banned religious rituals and persecuted Jews who dared to observe their faith. Which is why today we are asked not only to light the menorah, but to proudly display it — to publicize the mitzvah. And that’s why we’ve invited all these reporters who are here. (Laughter.)

Everybody in America can understand the spirit of this tradition. Proudly practicing our religion, whatever it might be — and defending the rights of others to do the same — that’s our common creed. That’s what families from coast to coast confirm when they place their menorah in the window — not to share the candles’ glow with just your family, but also with your community and with your neighbors.

The story of Hanukkah, the story of the Jewish people, the story of perseverance — these are one and the same. Elie Wiesel taught us that lesson probably better than just about anybody. In one of his memories of the Holocaust, Elie watched a fellow prisoner trade his daily ration of bread for some simple materials with which to piece together a makeshift menorah. And he wrote that he couldn’t believe the sacrifices this man was making to observe the holidays. A stunned Elie asked him, “Hanukkah in Auschwitz?” And the man replied, “Especially in Auschwitz.”

The world lost my friend, Elie Wiesel, this year. We lost a keeper of our collective conscience. But we could not be more honored today to be joined by his beloved family. (Applause.) His wife, Marion, is here. (Applause.) His wife, Marion, is here, beautiful as always. His son, Elisha, is here. His daughter-in-law, Lynn. And his grandchildren, Elijah and Shira. (Applause.) So today we’re going to light a menorah that Shira made a few years ago when she was in kindergarten. (Laughter.) And as is appropriate to the spirit of the season, it’s made of simple materials. It’s got bolts and tiles and glue. (Laughter.) And it looks like some balsa wood.

THE PRESIDENT: What is it?

Over the years, your grandfather also corrected me several times. (Laughter.) And it was always very helpful. (Laughter.)

We’ve lit a number of beautiful menorahs here at the White House. Some that weathered storms like Katrina and Sandy; others that were crafted by spectacular artists from Israel and the United States. But I’ve just got to say, this is my favorite. (Laughter.) I think this is the most beautiful one that we’ve ever lit. (Laughter and applause.) And it’s a reminder that a menorah is not valuable because it’s forged in silver or gold. It’s treasured because it was shaped by the hands of a young girl who proves with her presence that the Jewish people survive. (Applause.) Through centuries of exile and persecution, and even the genocide of families like the Wiesels endured, the Hanukkah candles have been kindled. Each wick an answer to the wicked. Each light a signal to the world that yours is an inextinguishable faith.

Jewish leaders from the Maccabees to the Wiesels, to the college students who proudly sing Hebrew songs on campus, reaffirm our belief that light still drives out darkness, and freedom still needs fighters.

So let me close by saying I want to say how much Michelle and I appreciate the opportunities to have celebrated so many Hanukkahs with you in the White House. You know, at the beginning of my presidency, some critics thought it would last for only a year. (Laughter.) But — miracle of miracles — (applause) — it has lasted eight years. It’s lasted eight whole years. (Laughter.) Nes Gadol Haya Po. (Applause.)

As many of you know, the name “Hanukkah” comes from the Hebrew word for “dedication.” So we want to thank you again for your dedication to our country, to the historic progress that we’ve made, to the defense of religious freedom in the United States and around the world. (Applause.)

And with that, let me invite Rabbi Exler to say a few words before Elijah and Shira light the candles and get this party started.