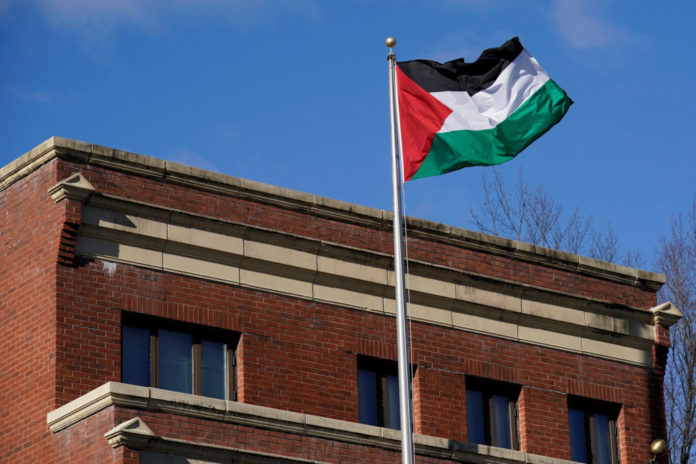 The Trump administration ordered the closure of the Palestinian diplomatic mission in Washington on Monday and threatened sanctions against the International Criminal Court if it pursues investigations against the U.S., Israel, or other allies. The moves are likely to harden Palestinian resistance to the U.S. role as a peace broker.

Shortly after the State Department announcement, President Donald Trump’s national security adviser, John Bolton, launched a broadside against The Hague-based International Criminal Court. Bolton declared that the ICC “is already dead” to the U.S. He also threatened the court and its staff with sanctions if it proceeds with investigations into alleged war crimes by American troops in Afghanistan.

The closure of the PLO office – the latest in a series of moves targeting the Palestinians – was centered on the fact that no “direct and meaningful negotiations with Israel” are underway despite previous warnings, the State Department said. It said the decision was also in line with U.S. law, a reflection of congressional concerns and consistent with U.S. policy to oppose and punish Palestinian attempts to bring Israel before the ICC.

The administration had told the Palestinians last year that closure was a distinct possibility unless they agreed to sit to down with the Israelis. It has yet to release its own much-vaunted but largely unknown peace plan although it said it still intends to do so.

Instead of heeding the warning to resume talks, “PLO leadership has condemned a U.S. peace plan they have not yet seen and refused to engage with the U.S. government with respect to peace efforts and otherwise,” State Department spokeswoman Heather Nauert said in a statement. “As such, and reflecting congressional concerns, the administration has decided that the PLO office in Washington will close at this point.”

Bolton followed up in his address to The Federalist Society, a conservative, Washington-based think tank.

“The Trump administration will not keep the office open when the Palestinians refuse to take steps to start direct and meaningful negotiations with Israel,” he said. “The United States supports a direct and robust peace process, and we will not allow the ICC, or any other organization, to constrain Israel’s right to self-defense.”

Palestinian official Saeb Erekat said the move was “yet another affirmation of the Trump administration’s policy to collectively punish the Palestinian people, including by cutting financial support for humanitarian services including health and education.”

The Palestine Liberation Organization, commonly known as the PLO, formally represents all Palestinians. Although the U.S. does not recognize Palestinian statehood, the PLO has maintained in Washington a general delegation office that facilitates Palestinian officials’ interactions with the U.S. government.

The closure was just the latest move the administration has taken against the Palestinians and in favor of Israel.

Just last month, it canceled more than $200 million in aid for Palestinians. Over the weekend, it announced it would cut $25 million in assistance for hospitals in east Jerusalem.

Trump recognized Jerusalem as Israel’s capital and moved the U.S. Embassy there, from Tel Aviv, in May. That led Palestinian President Mahmoud Abbas to break off contact with U.S. officials for what he called pro-Israel bias.

“The United States continues to believe that direct negotiations between the two parties are the only way forward,” spokeswoman Nauert said in her statement. “This action should not be exploited by those who seek to act as spoilers to distract from the imperative of reaching a peace agreement.”

As for the ICC, Bolton questioned the legitimacy of the court and warned that the U.S. would thwart any attempt by its prosecutors to open investigations into Americans for alleged war crimes and other abuses in conflicts in Afghanistan or elsewhere. Bolton, a leading critic of the ICC said the Trump administration would impose sanctions on the court and take other measures to hamper its ability to function should it proceed with such probes.

“The United States will use any means necessary to protect our citizens and those of our allies from unjust prosecution by this illegitimate court,” Bolton said. “We will not cooperate with the ICC. We will provide no assistance to the ICC. We will not join the ICC. We will let the ICC die on its own. After all, for all intents and purposes, the ICC is already dead to us.”

Bolton said the U.S. would “not sit quietly” if the ICC came after it, Israel or other U.S. allies. He said ICC judges and prosecutors would be banned from coming to the U.S., their assets in U.S. jurisdictions would be frozen and they would face prosecution. Similar measures would be taken against any company or state that assists an ICC investigation of Americans, he said.

“No committee of foreign nations will tell us how to govern ourselves and defend our freedom,” he said.

The Clinton administration signed the Rome Statute that created the ICC but had serious concerns about the scope of the court’s jurisdiction and never sought ratification by the Senate, where there was broad bipartisan opposition to what lawmakers saw as a threat to U.S. sovereignty.

When George W. Bush took office in 2001, Bolton sought and received permission to travel to New York to ceremonially “unsign” the document at the United Nations.