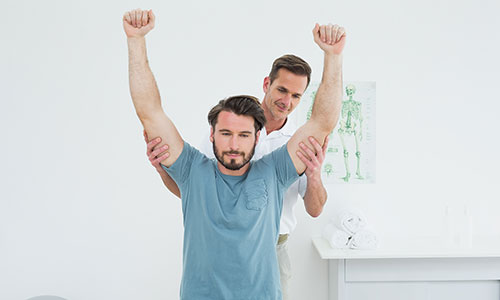 “I am sorry, Mrs. Ploni, but the muscle testing we performed on you indicates that your compatibility with your spouse is a 1 out of a possible 10 on the scale.”

“Your son being around his father is bad for his energy levels. You should seek to minimize it.”

“Your husband was born normal, but something happened to his energy levels on account of the vaccinations he received as a child. It is not really his fault, but he is not good for you.”

Welcome to the world of Applied Kinesiology or health Kinesiology and the way that it is practiced in, yes, some of our own communities.

The world of alternative medicine is not the innocuous and harmless pursuit that people may think it is. It is often used by practitioners in bizarre ways in which control and authority are exercised over other people. Incredibly, there are people who now base most of their life decisions on something called “muscle testing.”

Practitioners believe or state that the body’s energy levels can reveal remarkable information, from when a bride should get married to whether the next Kinesiology appointment should be in one week or two weeks. Prices for a 45 minute appointment can range from $125 to $250 a session.

One doctor who is familiar with people who engage in such pursuits remarked, “You have no idea how many inroads this craziness has made in our community.”

HOW THEY CLAIM IT WORKS

According to the Gale Encyclopedia of Alternative Medicine, AK (applied kinesiology) is system that evaluates structural, chemical, and mental aspects of health by using “manual muscle testing (MMT)” along with other conventional diagnostic methods. The belief of AK adherents is that every organ dysfunction is accompanied by a weakness in a specific corresponding muscle,] Treatments include joint manipulation and mobilization, myofascial, cranial and meridian therapies, clinical nutrition, and dietary counseling.

A manual muscle test is conducted by having the patient resist using the target muscle or muscle group while the practitioner applies force the other way. A smooth response is called a “strong muscle” and a response that was not appropriate is called a “weak response.”

Like some Ouiji board out of the 1970’s, Applied Kinesiology is used to ask “Yes or No” questions about issues ranging from what type of Parnassa courses one should be taking, to what Torah music tapes one should listen to, to whether a therapist is worthwhile to see or not.

“They take everything with such seriousness – they look at it as if it is Torah from Sinai,” remarked one person familiar with such patients.

One spouse of an Applied Kinesiology patient was shocked to hear that a diagnosis was made concerning himself through the muscle testing of his wife – without the practitioner having ever met him!

Practitioners of Applied Kinesiology may be Jewish or gentile, they are still seen by adherents. Indeed, one gentile practitioner makes it a practice to travel to Israel and visit graves of righteous Rabbis. He stated that he travelled to “37 graves in Israel and gets energy from them.”

And the lines at the office of the AK practitioner are long. One husband holds a crying baby for three hours, while his wife attends a 45 minute session. Why so long? The AK practitioner let other patients ahead – because of emergency needs.

The whole concept brings up a number of halachic issues. Is recommending someone to see an Applied Kinesiology practitioner a violation of the Torah prohibition of Lifnei Iver, putting a stumbling block before the blind? Is it a violation of darchei emori?

One type of Lifnei Iver is giving a person an eitza sh’aina hogenes – misleading advice. Three such examples are found in the Toras Kohanim and they clearly indicate that AK is a direct violation of Lifnei Iver:

1] To advise a person to leave at a dangerously early time in the morning, when thieves are more likely to victimize him (Kedoshim Parsha 2).

2] To advise him to go out in the hottest of noon so that he will get a sunstroke.

3] To advise him to sell his field in order to purchase a donkey, and then by trickery purchasing his field from him in exchange for a donkey.

It is this author’s conclusion that in light of countless studies showing the ineffective nature of this therapy, the practitioners of AK are unequivocally violating Lifnei Iver Lo Sitain Michshol (see the author’s own Sefer on Lifnei Iver entitled Misguiding the Perplexed with haskamos from the leading gedolim).

Rabbi Yitzchok Stein, a Posaik, the Foltichander Rav Shlita and the Rosh Beis Din Avnei Shaish in his Kuntrus al Tifnu writes that there are violations of other biblical prohibitions. He was also the Rosh Beis Din of Dayan Yechezkel Roth, Karlsburger Rav, for thirty years.

In conversation with this author, Rav Stein related that Dayan Roth ruled in two handwritten letters that it is absolutely forbidden even in cases of Pikuach Nefesh. He also stated that Dayan Yitzchok Tuvia Weiss from the Eida Chareidis has stated that it is entirely forbidden. He was recently misquoted saying that he had rescinded his ruling. To address this Rav Weiss signed it again writing on the 24th of Shvat 5777 (this past year), “Haiisur adayin betokfo – the prohibition remains intact.”

Rav Stein further stated in regard to Applied Kinesiology:

“There is an issur of Kosem kessem. Why is it kosem kessem because the Rishonim write that any action that works in a manner that is not bederech hateva that reveals hidden things. Some wanted to say that it is only forbidden if it reveals the future, but the Rishonim indicate that it is any revelation that is not done through teva – natural means.

There is an asseh of tamim tihiyeh im hashem elokecha. There is a lav of ubechukosaim lo saylaichu and this is darkei emori. If the practitioner is a gentile there is also a question of being nisrapeh from a gentile who is a min.”

It is clear that anyone who is concerned for observing the Torah must stay far far away from this.”