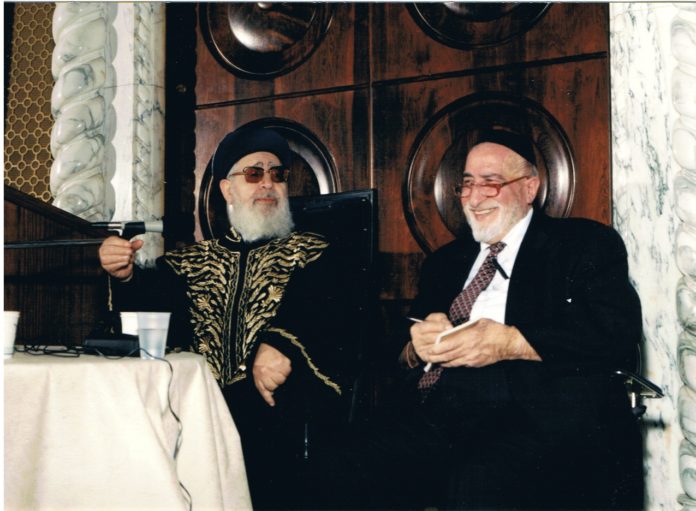 It could have been described as Brooklyn’s best kept secret. Rav Ovadiah Yoseph zatzal’s chevrusah for decades and childhood friend, Rabbi Baruch Ben Chaim zt”l, was living right here in Brooklyn, and gave daily and weekly shiurim to the Aram Sova Syrian community in Brooklyn for close to fifty five years. [Chacham Baruch is pictured above with Rav Ovadiah Yoseph]

These shiurim were taped and now are being transcribed and put into Sefer form by a formidable Talmid Chochom, Rabbi Shaul SimanTov of Lakewood, New Jersey. Two beautiful volumes have emerged thus far and more are on their way.

The shiurim, like those of great Torah scholars, appeal to both the layman as well as the Torah scholar. In their new form, however, Rabbi SIman Tov has added the sources in the Rishonim, acharonim and responsum that better reflect the profound nature of Chacham Ben Chayim’s depth and sagacity. The notes give further clarifications as well as adding the sources to the color in which Rav Ben Chaim provided in his shiurim.

This author describes it as a best kept secret, because even many Syrian Jews were entirely unaware of the jewel that dwelled in their midst. Chacham Baruch devoted his life to Kiruv and to the teaching of Torah. He was a man of extraordinary humility – which also contributed to this best kept secret nature.

Like his Chevrusah of his youth, Chacham Baruch’s Torah is universal – for both Sefardim and Ashkenazim. Indeed, his first shteller was as a Rav of an Ashkenazic community in South Africa. The explanations in these first two volumes of Shulchan Aruch Orach Chaim deal with the halachos both according to Rav Yoseph Karo as well as the Ramah.

Chacham Ben Chayim was peers with Chacham ben Tzion Abba Shaul zatzal and Rav Ovadiah Yoseph zatzal among others, and was part of that “wonder-kind” era at Yeshiva Porat Yoseph under Rav Ezra Attiya zatzal. Rav Attiya was the long time Sefardic chief Rabbi of Eretz Yisroel whose responsa are still cited in modern times. Chacham Ben Chayim entered the Yeshiva at age eleven and received Smicha from his Rosh Yeshiva. At a young age he also served as a dayan alongside Rav Attiya.

The inspirational and crystal-clear nature of Chacham Baruch’s introduction to Torah sh’baal peh and the entire structure of halacha and Talmud study is such that there is no question that it should be translated into English and used as a text for every Baal Teshuvah, indeed every yeshiva student.

Chacham Baruch took his position at the age of twenty eight and taught until his passing some twelve years ago. His shiurim simultaneously provide both knowledge as well as loving guidance – something extremely necessary in today’s age.

“The greatness and wisdom of Chazal was beyond calculation. This expression found form not only in the wisdom of teh Torah, but even in the outside sciences that derive from it, such as medicine, astronomy, biology, mathematics etc. They mastered them without limitation. Note how the tractates of Eiruvin and Klayim are filled with fundamentals of engineering and math. How they demonstrated their astronomical background in the laws of Kiddush haChodesh.

And even the sages of the generations that followed, such as the Rambam, the Ibn Ezra and the Vilna Gaon. They amazed the entire world with their remarkable knowledge that they derived from the study of Torah. Many things which the sages already knew from the power of the wisdo of Torah that they had within them, the sages of the nations were unable to discover even after centuries of experimentation, knowledge and philosophy.”

Note the depth and the loving nature of the instruction combined with the necessary background in hashkafas haTorah. It is the perfect sefer to begin learning with a chevrusah.
Chacham Baruch goes on to explain how the words of the sages at times are to be taken with more urgency than Torah requirements (see Eiruvin 21b). He carefully demonstrates why this is.
There is also an essential background in the nature of the pillars of the Poskim who form the backbone of the development of halacha.

The halachos themselves in volume two are brilliant expositions of the fundamentals of krias shmah and the associated areas. Rav Baruch is able to bring in very pertinent Gemorahs and explanations from the acharonim and rishonim that give the perfect “new look” to the explanation of the halacha. In that sense, it is similar to the new twist that one can see in the Rav Shulchan Aruch’s restatement of the halacha, or the Chayei Odom, or even the Levush. In other words, it is filled with precious pearls that add that essential “fresh eye.”

The section in the back compiled by Rabbi SimanTov and masterfully written, provides further references to explore the subtle discussions that Chacham Baruch begins and alludes to in the main text of the work. Rabbi SimanTov is clearly an up and coming power in his own right.

The seforim are beautifully typeset and bound. The overall project is sponsored by Mr. Ike S. Franco in memory of his father Samuel Franco a”h and this specific second volume is cosponsored by Mr. Edddie Betesh. Both Seforim have remarkable approbations by Rav Dovid Yoseph who lovingly recalls the friendship that he had with his father and the depth of their Torah exchanges.

Future volumes on the yomim tovim, on Shulchan Aruch and on Pirkei Avos are planned. The sefer is available in many Seforim stores orr can be ordered 718-336-5252. The website for the future ordering of seforim is zichronbaruch.com.