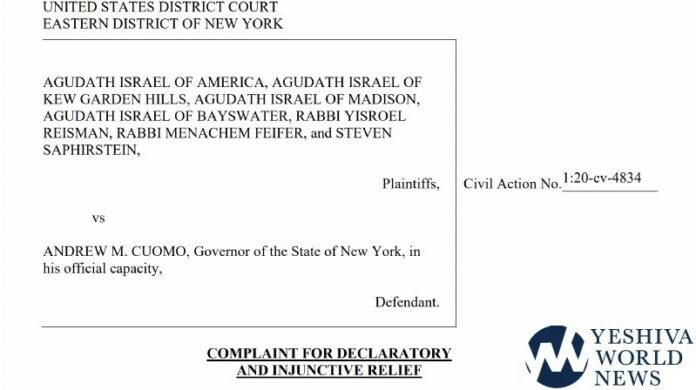 Earlier this week, in an effort to help stop the spread of COVID-19, the governor promulgated an executive order severely restricting the use of houses of worship in predominantly Orthodox Jewish neighborhoods, going so far as to impose a 10 person maximum in so-called “red zones.”

Agudath Israel, together with associated synagogues and rabbis, yesterday filed for injunctive relief in federal court, noting the need for immediate relief in light of the fact that in the three holiday days of Hoshanah Rabbah (today), and Shemini Atzeres and Simchas Torah (October 10th and 11th, respectively), the executive order would make it impossible for Orthodox Jews to worship as their religion intends.

The Agudah filing was clear that social distancing, masking, and other measures against COVID-19 transmission would and should still be actively encouraged and performed. At the same time, it made the point that it is eminently possible to allow more than ten people to pray in a large shul building and still use safe protocols to stem disease transmission.

In her decision today, Federal District Judge Kiyo Matsumoto rejected Agudath Israel’s request for a temporary restraining order. In her opinion, the damage inflicted by Governor Cuomo’s executive order was not “irreparable.” She pointed to the fact that houses of worship were locked down in the early phases of the pandemic and that religious practitioners dealt with it.

“This ruling is disappointing, to say the least,” said Rabbi Chaim Dovid Zwiebel, executive vice president of Agudath Israel. “Of course we understand the importance of taking precautionary measures against COVID-19, but there are ways to do so without totally disrupting our ability to use our shuls. Looking ahead, we will continue to do all in our power to defend our constituents’ rights, while at the same time promoting all appropriate health protocols.”

Agudah Chairman of the Board Shlomo Werdiger expressed his regret over the ruling, and called upon Governor Cuomo and other governmental officials to be more solicitous of the community’s legitimate religious needs. “Whether the issue relates to our shuls, or to our yeshivos, or to anything that is essential to us as a religious community, we appeal to our elected officials and executive agencies to work with us collaboratively in developing policies that both ensure good health and allow us to practice our faith. It shouldn’t be necessary to have to fight these things out in court.”