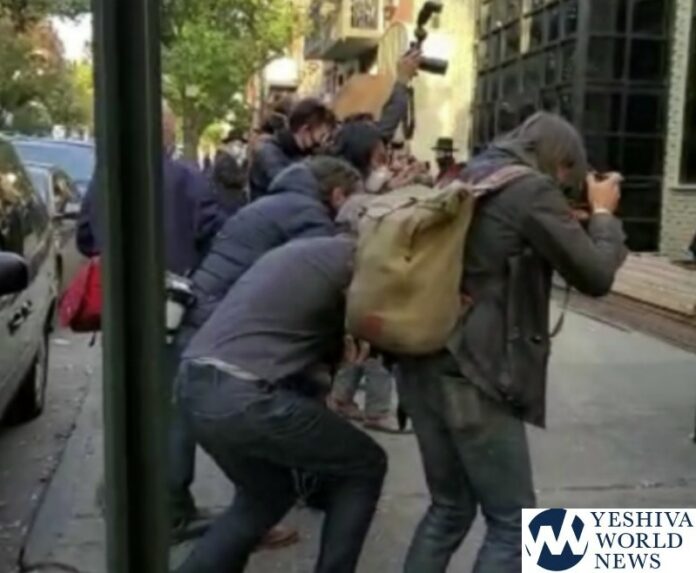 Quick a Jew! Get the cameras fast everyone!

The sheer number of reporters flooding the Jewish community the past few days is simply  sickening and dangerous, as they stand around hoping to catch a Jew without a mask. It has reached a level of disgust.

How long before the over aggressive news media intentionally baits a Jewish citizen into a physical altercation?

Not to worry, you won’t ever see the scene like in the video below, in a black community in NYC.

In Boro Park a while ago, Channel 7 N.J. Burkett was chased out of Boro Park. One resident asked why they never go cover the Bronx where there are many without masks. Not to worry, he was seen in Williamsburg a few minutes later – looking for more Jews to film.

In this next video we see a reporter who brought along his helmet – just in case those violent Jews get out of control – like when the Jews will burn police cars, cause over ONE BILLION in losses when looting Manhattan businesses, and throw bottles, rocks and sharp objects at our hero police officers….

Where was this crowd of reporters when a massive mask-less crowd gathered in Manhattan on Saturday to celebrate the memory of Breonna Taylor?

If you have any questions, simply watch the video below that was on YWN Instagram for the past few days.

Why doesn't Satmar make their wedding in memory of #BreonnaTaylor? This video was taken in Manhattan on Saturday. While YWN is not condoning a massive wedding, we cannot ignore the glaring double standard and what is appearing to be blatant anti-Semitism.

This behavior is despicable, and these reporters should be ashamed of themselves. The community finally had enough, and began horn-bombing the reporters as they attempted to record their newscasts.

They even sent a news-chopper (CBS2) to fly overhead to hopefully get some footage of those Jews.

By the way, do reporters not have to social distance?