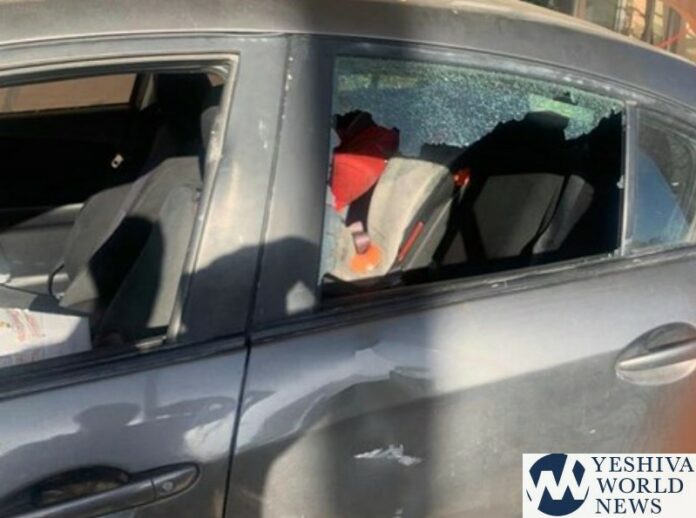 A woman in the advanced stages of pregnancy and her husband were attacked while on their way to a birthday celebration at the Kosel.

According to the couple, when they passed Wadi Joz in East Jerusalem, on Thursday, they fell victim to an attack that included a large group of Muslim men throwing rocks at their car and trying to pull them out of the vehicle. The woman suffered an injury to her shoulder and the car was badly damaged,

The husband told N12 News, “Waze led us through Wadi Joz. When we were in the heart of the neighborhood we realized that we were caught in an ambush. In front of us, a Toyota Corolla car pulled out and suddenly slowed down. Within seconds, dozens of attackers came from all directions: from vehicles, bus stops, and shops. They shouted ‘Sllah Akbar’ and threw stones at us. It was an assassination attempt. We thought we would not get out of there alive.”

“I realized they were going to get us out of the car,” he recalled. “All the windows were shattered and after a quarter of an hour that felt like an eternity, I managed to get around them and escape from there. My wife called the police in tears – at first, they could not locate us, and eventually, a police officer came to rescue us and accompanied us out of the neighborhood.”

The couple said that they were very happy that their three children were not in the car at the time, as the gang of Arabs had completely destroyed the backseat thinking that there were kids in the car and wanted to hurt them.

The couple was taken to a police station on Har HaZeisim, where they filed a report and a complaint to the police. They also met other families who had suffered a similar situation and who also gave testimony against the same Toyota vehicle that purposely slowed them down.