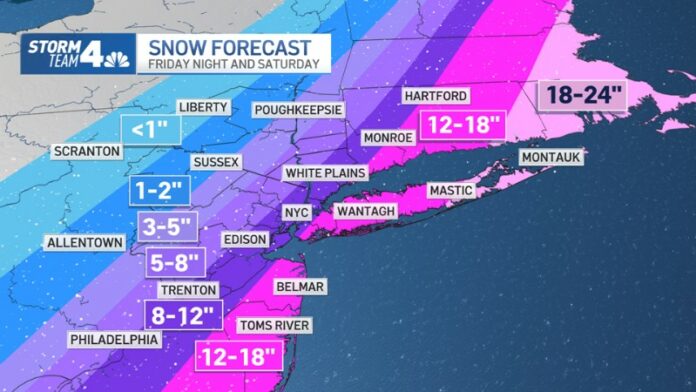 A powerful nor’easter threatens to slam the tri-state starting Friday night, and there is now a clearer picture of who will be impacted the most — with well over a foot of snow likely for some.

A Winter Storm Warning is now in effect for New York City, Long Island, Westchester and Fairfield counties. A Blizzard Warning is up for Monmouth and Ocean counties.

The actual storm will begin to strengthen Friday night as it descends upon the tri-state. It will intensify rapidly and meet the definition of a “bomb cyclone” as it strengthens — meaning a very strong, potent storm is likely.

New York City’s Department of Sanitation issued a snow alert, which takes effect Friday at 4 p.m. and continues through 7 a.m. Sunday. Pretreating of roadways begins Friday morning, with salt spreaders, brine and liquid pretreatment all part of the rollout. More than 2,000 plows will be at the ready.

While the exact track of the storm is still forming, the nor’easter will move in late Friday and continue into Shabbos morning, bringing 6 to 12 inches of snow to New York City and surrounding suburbs.

In addition to the snow and wind, it will also be very cold Saturday, with a high of 22 in the city and RealFeels below zero. Lows will fall into the teens overnight, making cleanup difficult and travel challenging even after the storm passes.

The north and south forks on Long Island will get hit the hardest of all, with two feet of snow possible for places east of Mastic and Manorville. The rest of Long Island will likely see more than a foot of snow, possibly 18 inches. Monmouth and Ocean counties along the Jersey Shore, as well as coastal Fairfield County, will see similar totals.

Good morning!
Confidence is increasing that a strong storm will impact the area tonight into Saturday night. Winter storm warnings were issued for most. Blizzard conditions are POSSIBLE across Long Island and SE CT.
Latest info here: https://t.co/Y3t26AgKbB pic.twitter.com/yRsmjLtt98

Conditions will start to deteriorate starting around midnight. Some places could see well over 12 hours of consistent snowfall. Wind gusts of 40-60 mph are likely, with isolated gusts of 70 mph possible.

Power outages will be likely, and driving will be close to impossible as the blowing snow will bring visibility close to zero during blizzard-like conditions at times.

The snow will last until 6 p.m. on Saturday, but the winds will stick around well after that. Gusts will continue to whip around until sunrise on Sunday.

The areas around Monticello in Sullivan County and Kingston in Ulster County will see the least snow, maybe 1 to 2 or 3 inches.