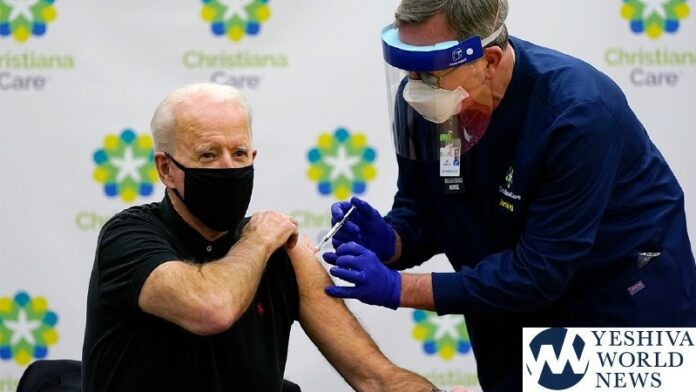 A tweet from the official White House twitter account tweeted “When President Biden took office, millions were unemployed and there was no vaccine available. In the last 15 months, the economy has created 8.3M jobs and the unemployment rate stands at 3.6% — the fastest decline in unemployment to start a President’s term ever recorded.”

Perhaps President Biden forgot that he received his SECOND vaccine a MONTH before he took office, and roughly ONE MILLION were already receiving the vaccine each DAY, under former President Trump’s “Operation Warp Speed”.

In fact, on the day Biden took office, he said that 8% of seniors had already been vaccinated.

Many are wondering if the “Minister of Truth”, Nina Jankowicz, who is the Director of the new Disinformation Governance Board will be issuing a correction, or if Twitter will flag the White House account for publishing false information.

Last month, the Department of Homeland Security announced the creation of the board to help combat the spread of disinformation online.

"no vaccine available"? What was president-elect Biden injected with? Sugar water? And was his *second* shot!

Maybe check your own tweets?https://t.co/jqAYzapv7E

Just YESTERDAY head of President Joe Biden’s new Disinformation Governance Board suggested that verified Twitter users to should have the ability to edit and add context to tweets from unverified users.

“Verified people can essentially start to ‘edit’ Twitter the same sort of way that Wikipedia is, so they can add context to certain tweets,” said Disinformation Board chief Nina Jankowicz in a Zoom meeting.

“Just as an easy example, not from any political standpoint, if President Trump were still on Twitter and tweeted a claim about voter fraud, someone could add context from one of the 60 lawsuits that went through the court or something that an election official said.”

Elon Musk, who is preparing a $44 billion takeover of Twitter, called the idea “disconcerting” and tweeted a follow-up saying “Don’t Diss Information.”