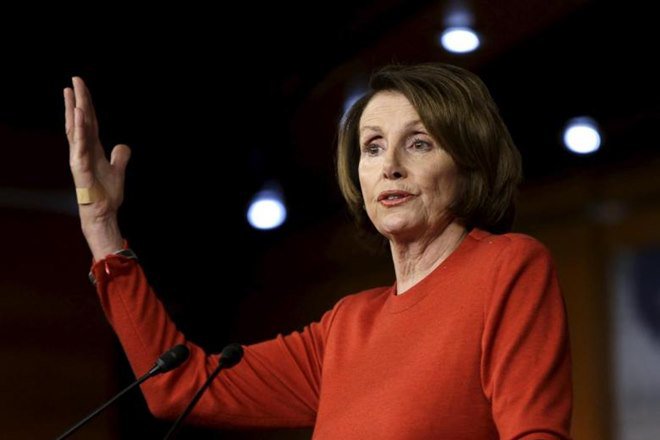 It’s more of an encore for Nancy Pelosi, the 77-year-old House Democratic leader who spent four years as the nation’s first female speaker, lost her majority in 2010 and now wants the gavel again. In that quest, the California lawmaker and fundraiser extraordinaire finds herself as the GOP’s preferred face of a Democratic Party trying to upend Republicans’ monopoly control in Washington.

Republicans are testing their approach in a pair of special House races where the specter of a second Pelosi speakership is intended to excite — or scare — Republican voters and sway independents enough to counter surging opposition to President Donald Trump. And the strategy could be a defining theme of the 2018 midterm elections.

In Montana, a grainy black-and-white television image of Pelosi greets voters mulling another Democratic upset bid. “Rob Quist talks folksy, but his record is more Nancy Pelosi than Montana,” a voiceover warns of the singer-turned-candidate.

Trump himself has joined in. “Ossoff is funded by Nancy Pelosi,” who wants “to land a blow against my presidency,” reads a fundraising email the president signed on Handel’s behalf.

Pelosi has proven effective as a prolific fundraiser and a leader capable of rallying Democrats to deliver major legislation for then-President Barack Obama. As speaker, she muscled through the 2010 health care law and the Dodd-Frank financial overhaul — complex laws the likes of which her Republican successors have been unable to handle.

Pelosi frames the attacks as proof Republicans have no affirmative case. “It shows the bankruptcy of their own initiatives,” she said recently on NBC’s “Meet the Press” when shown ad clips.

Ossoff calls them “tired” and repeated his pledge to be independent. Reminded that Pelosi and other House Democratic leaders held a fundraiser for him in Washington on March 16, he said, “I’m a Democrat running for Congress.”

The coordinated GOP assault certainly resonates with voters like Matt West, a Georgia financial planner. West, 45, says his first-round vote for Handel wasn’t about her or Trump, but about national Democrats. “I just don’t believe that he’d stand up to Nancy Pelosi if the district wanted him to,” West says of Ossoff.

Some Democrats say Pelosi and other party leaders walk into stereotypes about liberals, making it harder to argue that Trump and Republicans hurt middle-class households.

“It gets very difficult when most of our leadership, almost exclusively, are coastal. That’s an issue,” argues Rep. Tim Ryan, D-Ohio, who unsuccessfully challenged Pelosi for minority leader last fall.

Former Rep. John Barrow of Georgia, a Democrat, argues the dynamics reflect gerrymandered districts and a campaign process that punishes moderates. Democrats will likely have to win some of those Republican-friendly districts to net the two dozen House seats they’d need for a majority.

Barrow weathered the 2010 Republican onslaught but ultimately lost in 2014, after years of Republicans branding him as an Obama-Pelosi tool, even though he did not vote for Pelosi as speaker after Obama took office as president. Barrow instead cast symbolic votes for civil rights leader John Lewis, another Georgia congressman.

“Both parties are tightly in the grip of the most partisan voters,” which necessarily yields a more extreme Congress, Barrow said. “I can’t tell you how many folks I had tell me, ‘John, you’d be our man for the job, but I just can’t do anything to support Obama and Pelosi.'”

The difference this time, though, is Republicans having to navigate through the politics created by their own uniquely polarizing president by making Pelosi an almost singular counter now that Obama is out of office.

Trump lost the national popular vote by almost 3 million, and he has Gallup job approval ratings lower than any recent president so early in his tenure. Republicans also attribute to Trump the national fundraising deluge for Ossoff, who’s on track to collect more than $10 million ahead of his June 20 runoff, and with the surprisingly close GOP victory margin in an April special House election in Kansas.

As Barrow, the former Georgia congressman, noted, the Pelosi effect is concentrated with a House congressional map drawn by many GOP-controlled legislatures that created more districts where she is an easy target.

“Trump may not be that popular here,” said Georgia Republican Greg Williams, who backed Handel’s top GOP opponent. But naming Pelosi, he said, is “a dog whistle for conservatives.”