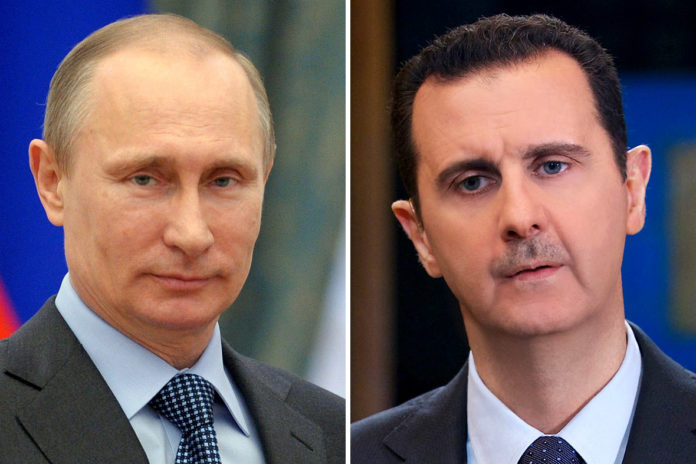 A warning from the White House to Syrian President Bashar Assad about another possible chemical weapons attack was also aimed at two of Assad’s key backers, Russia and Iran, the U.S ambassador to the United Nations said Tuesday.

During testimony before the House panel on foreign operations, Nikki Haley also called Assad “barbaric” and said she can’t envision a “healthy Syria” if he remains in power.

“The goal is at this point not just to send Assad a message, but to send Russia and Iran a message,” Haley said. “That if this happens again, we are putting you on notice. My hope is that the president’s warning will certainly get Iran and Russia to take a second look, and I hope that it will caution Assad.”

Her comments come about 12 hours after White House Press Secretary Sean Spicer said the U.S. had “identified potential preparations for another chemical weapons attack by the Assad regime that would likely result in the mass murder of civilians, including innocent children.”

Spicer said the activities resembled preparations the Assad government took before an April 2017 attack by Syrian forces that killed dozens of men, women and children. He warned that if “Mr. Assad conducts another mass murder attack using chemical weapons, he and his military will pay a heavy price.” The statement was issued without further explanation. Assad’s government rejected the allegations.

But the Pentagon said on Tuesday said it detected “active preparations” by Syria for a chemical weapons attack, giving weight to the White House statement. A Pentagon spokesman, Navy Capt. Jeff Davis, said the U.S. had seen “activity” at Shayrat airfield that “indicated active preparations for chemical weapons use.” That is the same base from which the Syrian air force launched the attack in April. Syria denied the charge.

After the April attack, Trump gave orders to fire dozens of Tomahawk missiles at Shayrat in central Syria. It marked the first time the U.S. has attacked Syrian forces in the six-year civil war.

Shortly after the White House statement on Monday night, Haley warned in a tweet that Russia and Iran, Assad’s key backers, also would be blamed for “any further attacks done to the people of Syria.”

Haley told the subcommittee that it’s “accurate” that the Trump administration identified signals of another possible chemical weapons attack, but she didn’t provide specifics.

Rep. Rodney Frelinghuysen, R-N.J., asked Haley whether the Trump administration’s focus in Syria and the broader Middle East is on toppling Assad or defeating the Islamic State group. Haley said Syria is “very, very concerning,” but said “a political solution has to happen.”