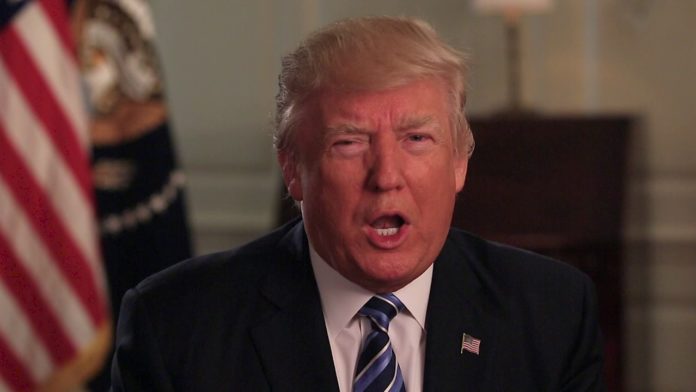 President Donald Trump attacked The Washington Post and Amazon on Twitter Wednesday, arguing that the online retailer was not paying “internet taxes.”

Trump stated on Twitter Wednesday: “The #AmazonWashingtonPost, sometimes referred to as the guardian of Amazon not paying internet taxes (which they should) is FAKE NEWS!”

It was not immediately clear what Trump meant by “internet taxes.” The White House declined to answer questions about the president’s statement.

Amazon.com collects state sales taxes in all 45 states with a sales tax and the District of Columbia, according to their website. State governments have sought to capture sales taxes lost to internet retailers, though they have struggled with a 1992 Supreme Court ruling that retailers must have a physical presence in a state before officials can make them collect sales tax.

Amazon CEO Jeff Bezos bought the Washington Post in 2013. He made the purchase as an individual and Amazon.com Inc. was not involved.

Bezos was one of a number of technology executives who visited the White House recently for a strategy session on modernizing government.

Trump has taken shots at Bezos and Amazon on Twitter before.

In 2015, he wrote that Bezos bought the Post “for purposes of keeping taxes down at his no profit company, @amazon.” He added that “If @amazon ever had to pay fair taxes, its stock would crash and it would crumble like a paper bag. The @washingtonpost scam is saving it!”

In a break from presidential tradition, Trump has so far refused to release his federal tax returns.

The #AmazonWashingtonPost, sometimes referred to as the guardian of Amazon not paying internet taxes (which they should) is FAKE NEWS!