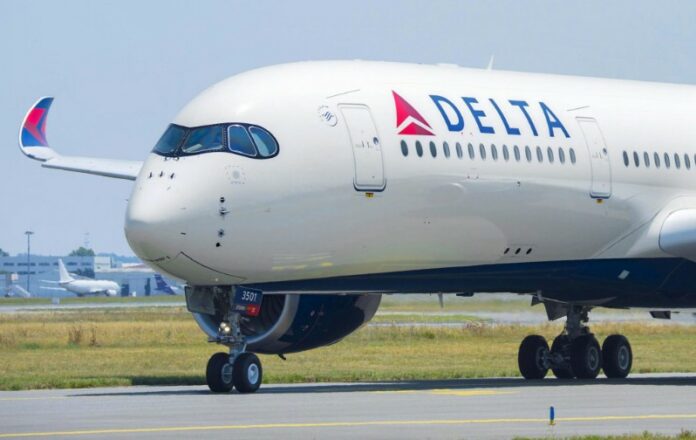 Eighteen frum girls from New York were forced to spend Shabbos in Europe after they were kicked off flights twice from Amsterdam to New York for unclear reasons.

Hamodia reported on the incident after speaking to askanim in New York, relatives of the girls, and other passengers on the plane.

The girls were part of a larger group of 56 girls who were on a tour of Jewish sites in Europe with Rebbetzin Shulamis Sternbuch of Israel. When the girls arrived in Amsterdam at the start of their trip on July 20, a KLM/Delta security official at the airport accused the girls of violating mask guidelines on the plane and threatened they would be blacklisted.

The girls denied the claims, saying they wore masks at all times, removing them only for eating. The girls contacted askanim in New York who called the airport and found out that no one had been placed on a blacklist.

At the end of their two-week tour in Europe, the girls, most of whom live in Monsey, Williamsburg, or Boro Park, boarded a flight on Thursday from Ukraine to New York with a stopover in Amsterdam.

A brother of one of the girls told Hamodia that the flight crew on the KLM flight from Ukraine was “harassing the girls the entire time.”

“Every few minutes, they were coming over to the girls, saying, ‘Fix your mask,’ even though the masks were on properly the entire time,” he said. “Then, when the girls started eating, the flight attendants said they were not allowed to eat because it was not the official meal time, but they didn’t say a word about the mask.” [The girls brought their own food since kosher meals were not offered on the flight.]

After landing in Amsterdam, the girls proceeded to board their connecting flight to New York but 18 members of the group were denied entry to the flight, without being provided an explanation. The girls were the first 18 girls on the group’s list in alphabetical order. The official who had banned the girls’ entry on the plane was the same one who threatened to blacklist them two weeks before at the start of their trip.

Meanwhile, the girls’ chaperone, who had already boarded the flight, realized that 18 members of the group were missing. She asked to disembark from the plane but her request was denied. She began banging on the door, not letting up even when the flight crew threatened that she would be arrested, saying that she wouldn’t leave the girls behind. She was eventually let off the plane and the girls on the plane continued to New York.

The 18 girls in Amsterdam were told by KLM that they can fly on another flight only if they each paid a 2,000 euro fine. The girls tried booking a flight with Delta but they also said the girls would have to pay 2,000 euros. [Delta is a partner airline with KLM.] The girls then tried to book a flight with another airline but KLM said it would charge 200 euros for the release of each piece of luggage.

“It was obviously anti-Semitism,” the brother said. “They targeted 18 Jewish girls, in alphabetical order, and they didn’t even bother giving a reason.”

The girls’ relatives in New York contacted Jewish activists. Oizrim Jewish Council contacted frum attorneys in the Netherlands who made frantic efforts to get the girls and their chaperone on a flight to New York before Shabbos. Joel Rosenfeld of Bobov contacted the office of U.S. Sen. Charles Schumer (D-N.Y.), and UJO of Williamsburg contacted the office of U.S. Rep. Nydia Velazquez (D-N.Y.), who contacted officials at Delta Airlines. Meanwhile, Chabad shluchim brought kosher food to the airport.

Following the intervention of Rep. Velazquez, Delta Airlines said that they will allow the girls on a Friday morning flight at no additional cost. The girls spent the night in the airport.

At 4:20 a.m. in New York (10:30 a.m. in Amsterdam), Bobover askan Joel Rosenfeld confirmed with the chaperone that the group was on the Delta flight. But to his utter shock, 32 minutes later, Rosenfeld received a call informing him that the group had been kicked off the flight, apparently because one or more girls tried switching seats.

Neda Krauss, a woman from Long Island who was on the flight, told Hamodia that a man on the plane had offered to switch seats so that she and her son could sit next to each other. “Two of the girls in the group who were also separated then asked if we could all switch things around so that the two girls would sit together and I would sit next to my son. It would be beneficial for everyone. And it was the most normal thing under any other circumstance. But then we were told by a steward that we were not allowed to make any seat switches, and so we all went back to our seats.”

The flight attendant didn’t explain why switching seats was not allowed but in any event, the girls didn’t protest or argue and simply returned to their seats, Kraus said.

But then the group of girls, and not Neda, her son, or the other man, was told to leave the plane. “The girls seemed petrified and scared,” Krauss says. “I really don’t know what the reason behind this all was.”

The girls said that the same KLM/Delta security official who had threatened them at the beginning of their trip and then kicked them off the second flight was the one responsible for kicking them off the third flight.

On the advice of their attorney, who was at the airport in Amsterdam and in contact with the chaperone, the group refused to leave the plane. All passengers of the flight were then told to deplane, including the group.

John said that he spoke with the girls at the airport. “I couldn’t believe how divergent their version and the flight attendants’ versions were,” John said. “While I didn’t see the incidents myself, when speaking with these girls, I didn’t sense any hint of rebelliousness. They were trying to be very compliant and in shock. They seemed really sweet and nice and polite.”

“So a flight attendant got angry that these girls had switched seats, and they, therefore, delay hundreds of people for two hours, and then they blamed it on not wearing masks and not complying with rules?” John said.

After two hours, all passengers, including Krauss and the man who had tried switching seats with her, but not the group of girls, were allowed back on the plane.

Askanim arranged for the girls to spend Shabbos in Antwerp and hope to put them on a flight to New York on Sunday.

“It is outrageous how these girls were disgraced,” John said. “I don’t want this incident to be forgotten about. Delta needs to do an investigation, and determine what happened.”

“On the face if it, this sounds like plain and simple antisemitism,” Rosenfeld said. “I am grateful to Sen. Schumer’s staff, who answered my calls at 5 a.m. Friday, and all the other officials and others who assisted as well. Sen. Schumer’s staff has assured us that this story is being investigated by executive-level Delta officials.”