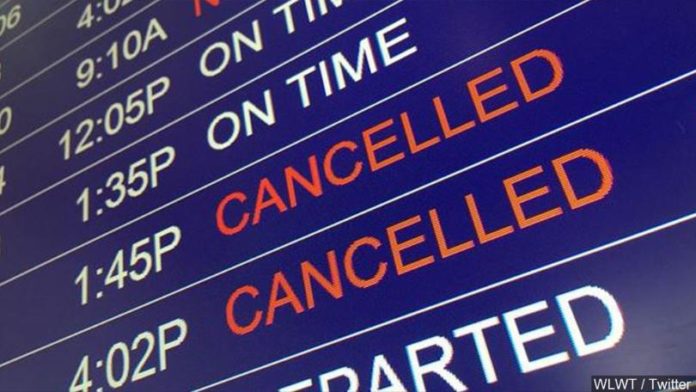 Wintry weather combined with the pandemic to frustrate air travelers whose return flights home from the holidays were canceled or delayed in the first days of the new year.

By early afternoon Sunday, more than 2,300 U.S. flights and more than 3,900 worldwide had been canceled, according to tracking service FlightAware.

That followed Saturday’s mass cancellations of more than 2,700 U.S. flights, and more than 4,700 worldwide. Saturday’s single-day U.S. toll was the highest since just before Christmas, when airlines began blaming staffing shortages on increasing COVID-19 infections among crews.

A winter storm that hit the Midwest on Saturday made Chicago the worst place in the country for travelers throughout the weekend as the region’s airports continued to recover Sunday morning. About a quarter of all flights at O’Hare Airport were canceled Sunday.

Southwest Airlines said it is working to help customers affected by about 400 flights canceled around the country Sunday, about 11% of its schedule. The Dallas-based airline said it anticipates even more operational challenges to come as the storm system pushes into the Eastern seaboard.

Delta Air Lines said Sunday it was issuing a travel waiver for planned flights this week out of mid-Atlantic airports in Baltimore and Washington in preparation for forecasted winter weather.

American Airlines said most of Sunday’s canceled flights had been canceled ahead of time to avoid last-minute disruptions at the airport.

SkyWest, a regional carrier that operates flights under the names American Eagle, Delta Connection and United Express, grounded nearly 500 flights on Sunday, about 20% of its schedule, according to FlightAware.

Airlines have said they are taking steps to reduce cancellations caused by the spread of COVID-19′s omicron variant. United is offering to pay pilots triple or more of their usual wages for picking up open flights through most of January. Spirit Airlines reached a deal with the Association of Flight Attendants for double pay for cabin crews through Tuesday, said a union spokesperson.

Airlines hope that extra pay and reduced schedules get them through the holiday crush and into the heart of January, when travel demand usually drops off. The seasonal decline could be sharper than normal this year because most business travelers are still grounded.