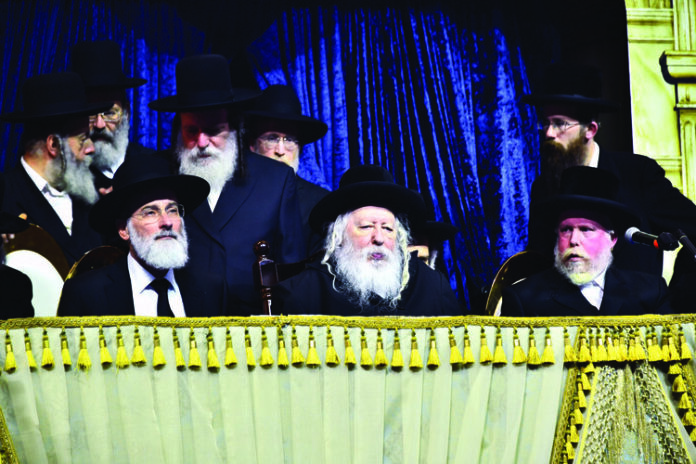 Recently, a crowd of 10,000 attended the massive Arana Stadium in Yerushalayim to watch a remarkable demonstration of kavod haTorah. The event was a mass, public farher – test of bachurim from the entire network of yeshivos of the Gerer chassdius. Many of these bachurim and avreichim have learned the entire Shas to the extent that they were prepared to be tested publicly, and not just before a small group, but in front of thousands of people led by the Gerer Rebbe, shlita.

The large stage was graced by the Gerer Rebbe, the prominent Rabbonim and Roshei Yeshiva in the Gerer Chassidus and the guest Rabbonim who had been invited to test the talmidim.

It was clear that Rav Michel Zilber was deeply impressed with the knowledge of the talmidim. Throughout the test, he was conversing with the Gerer Rebbe clearly showing what an impact the wide-ranging knowledge of Shas of the young bachurim and yungeleit had on him.

Rav Shalom Cohen, too expressed his absolute amazement that young men should have such a comprehensive command of Shas at such a young age.

After asking numerous questions and receiving answers to virtually every one of them, Rav Hofstedter related a dvar Torah conveying that greatness in Torah is not accomplished in one fell swoop and one shining moment. It is a result of constant learning and chazara, built step upon step, going from one level to the next, in a slow, methodical way. Greatness in Torah and in all aspects of avodas Hashem, is achieved by climbing the mountain slowly until one reaches the peak.

Rav Hofstedter said, “Ashreichem Gerer Chassidim that you are learning in such a way! Aschreichem that you are methodically scaling the mountain of Shas until you know it and can be tested on it!”

Click on the play button below to view footage of the Bechina.