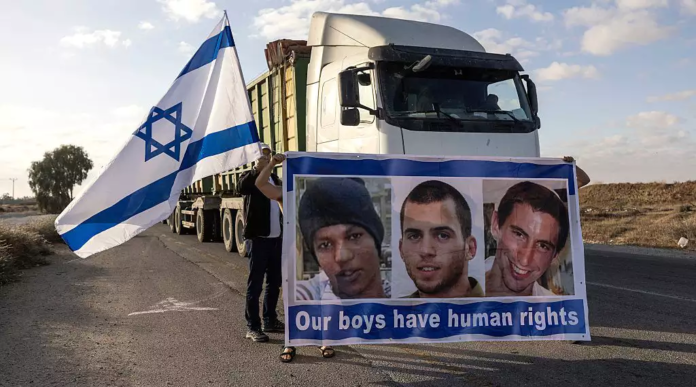 The families of the two slain IDF soldiers whose bodies are being held by Hamas and the Israeli civilians being held hostage in the Strip set out on a three-day march toward the Gaza border on Wednesday.

According to a Walla report, the march, which was launched by the Goldin family, began near their home in Kfar Saba in central Israel in an attempt to pressure the Israeli government to insist on the return of the captives and soldiers’ bodies.

“Today we are marching instead of the government. All the terrorists have been released, all the gifts, the money, everything has been given to Hamas,” he said. “They continuously make deals with Hamas and abandoned the soldiers.”

“My brother has been left abandoned in Gaza for the past eight years,” said Ayelet Goldin- Kaufman, Hadar’s sister. “He was abandoned from the moment he was taken captive. Since then he’s been abandoned at every opportunity. We’re feeding a monster, which is Hamas, that is controlling us. Everything it asks for it gets – almost 700 terrorists have already been released.”

“Those who abandon the fallen will abandon the living as well,” Ayelet added. “There is an agreement between the state and its citizens, that a soldier that goes missing in battle is brought back, it’s a symbol of this state’s ethics. I’m calling on Yair Lapid to be an ethical prime minister – make a plan.”

The march is scheduled to end on Friday at the Erez border crossing between Israel and Gaza but due to the current security circumstances, it will have to end well before the border.