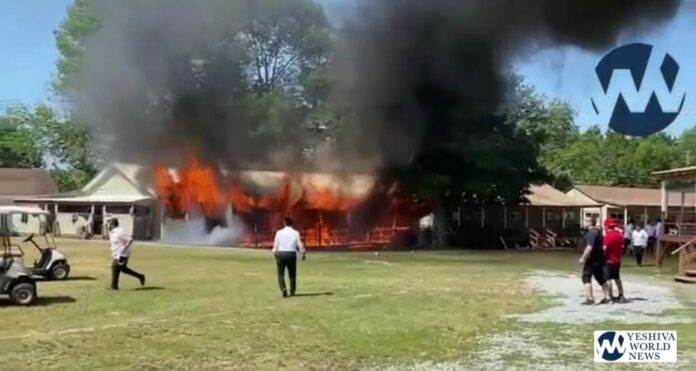 A massive fire broke out on Camp Rayim Mesivta’s (Mesivta Aliya) property in Parksville, NY, on Thursday morning. The fire, which began in a bunkhouse, quickly escalated to a second alarm blaze after extending to a second bunkhouse.

The local fire department and Catskills Hatzolah were both on the scene of the fire at the camp, located on Breezy Hill Road.

B’chasdei Hashem, everyone has been accounted for, and no injuries were reported. It appeared at first that upwards of 40 pairs of tefillin may have been lost in the fire, but that number has since been revised downward to about 7 pairs (see video below).

Camp Aliya currently rents a portion of Camp Rayim’s property for the use of its program.

After the incident, Camp Rayim released the following statement:

“First, we would like to assure you that everyone in camp is b”h safe and doing fine. This morning during learning groups, a fire broke out in one of the bunkhouses. B”h our staff made sure no one was in the affected structures or any nearby structures. The fire department swiftly came, contained the fire, and extinguished it.  We thank them for their immediate response and their great work.

“All of the many avenues at our disposal are being implemented to ensure that camp life continues as normal for all of our campers and staff. We thank Hashem for keeping everyone healthy and safe. Wishing an easy fast to all.”