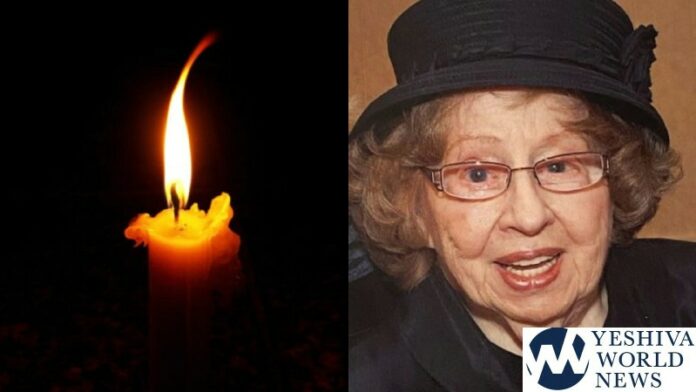 Mrs. Hannah Storch, a’h, the legendary Baltimore Jewish community matriarch was nifteres on Sunday, October 25th, at the age of 98. As HaRav Aharon Feldman, shlit”a, Rosh Hayeshiva, Ner Yisrael, mentioned in his hesped at the socially-distant levaya held outdoors on Sunday, October 25, Mrs. Storch was a true Aishes Chayil – woman of strength. “When I was a little boy here in Baltimore, the name M. Leo Storch was a household word. He had to do with everything educationally, spiritually, organizationally, and so much more. When he was niftar, his almanah continued in his ways, expanded him to this day. She was a partner in thousands of his endeavors…She was the pride of Baltimore; the pride of Baltimore has left us.”

HaRav Moshe Heinemann, shlit”a, remarked in his hesped that under regular circumstances, a levaya for Mrs. Storch would have drawn thousands of people. “I’m sure thousands were probably listening to it or watching it from afar. Mrs. Storch didn’t want a large levaya, and the Ribono Shel Olam made sure it didn’t happen. The family deemed during COVID that it wasn’t proper to have a levaya indoors. Outdoors, the Ribono Shel Olam sent the rain so it would be very uncomfortable. The Ribono Shel Olam was listening to her wishes…her days were filled with mitzvos, and even though she was an almanah for many, many years, she never turned away from the path that she and her husband, M. Leo Storch, set forth. The chesed that went out from their home was remarkable – it was open to anyone who needed help. People entering their home were greeted with warmth, respect, and kovod.”

Rav Heinemann continued and said “…Mrs. Storch was a unique type of person which we don’t see very often anymore. She carried herself with a dignity, almost a royalty, and she treated everyone with respect and graciousness. She was wise in the world of business and ably ran the family business for many years…She was totally devoted to her family and to whatever she could do for klal yisrael. The dedication of the Storch family to Bais Yaakov is legendary. The school would never have gotten off the ground without the mesiras nefesh of the Storch family.”

Mrs. Storch’s son, Frank Storch, began the family hespedim saying, “Women have different strengths: some are outstanding supportive wives, some are exceptional mothers, some are loving grandmothers, some are active in community affairs, some are capable to deal in business. Rarely do you find one person who excels in all of these areas in unique ways. My mother was all of the above plus more. My father, z”l, passed away after they had been married for only 18 years. Mom’s total devotion was to Dad. She was there for him with anything he needed. She shouldered many tasks so that he would be available to the Baltimore Jewish community that relied on him so much. But it didn’t stop when my father, z” l, was niftar…. She was an exceptional mother. She realized the strengths of each of her children and …my sisters are imbued with many of the wonderful midos and sensitivities that my mother was known for.”

Frank continued, “Rabbi Brull wrote this morning, ‘…Before every winter season began, Mrs. Storch would call me to her home and she would say, ‘Rabbi Brull, do you know that it is getting cold outside. I’m sure there are many people – and children – who don’t own coats and gloves and scarves. I bought these hundreds of coats and gloves and scarves and would like you to please distribute them.’ Mrs. Storch constantly thought of ways to help everyone. Her life was never about herself – only about how she could help others. She is irreplaceable. My mother was zoche to arichas yomim, and we were zoche to be with her, see her and learn from her for these yamim and that zechus comes with an achrayus. Yes, we were incredibly blessed to have had years living with Mom, but we know that we are now responsible to continue to live by her standards and continue her legacy. She taught us by lesson and by example how to be a devoted spouse, parent, and community leader. We have a powerful role model to follow, an incredible example to live up to.”

Mrs. Storch’s son-in-law, Rabbi Shlomo Spetner, who is married to Mindy, provided some family history. “Our father, Rav Moshe Aryeh Halevi, sought out a zivug that could be his true eizer. He married a bas talmid chacham; our grandfather was a talmid in Slobodka. He had been a Rav in America, and that mesorah was imbued into the family to our mother and very much imbued into the family by our grandmother. Our mom was born in Atlanta, Georgia in 1922. I can’t imagine what a midbar that must have been. He was a Rav in Georgia. In the 1930s, he came to the Northeast to be a Rav in the New Jersey area. That mesorah is what built our family and that is what our father sought out in his zivug….When he became engaged [to our mother] the first place he went was to show her was the new Bais Yaakov on Greenspring Avenue that was a single, old building called ‘The Mansion” – saying, ‘This is where we are going to build the future.’ She became a complete partner in every way, enhancing all he had done.

Mrs. Storch’s son-in-law, Mr. Yaakov Hillel Gross, who is married to Judy (Bregin), recalled the first time he met his future mother-in-law. “I was immediately struck by her regal appearance. You knew you were in the presence of somebody special; it was as if you were with the queen. She just gave off that aura. Her dress, her demeanor was from a long-ago era, a different time. She was an icon that we were blessed to see in our age. There is no other duplicate of her today. She was the last of a very special breed; she was a very special lady…. She was always thinking of others; she was kulo tzidkas.”

The myriad acts of gemilas chasadim that M. Leo and Hannah Storch, z”l, performed in the Baltimore community and beyond touched innumerable lives. May we be zoche to follow the example set by Mrs. Hannah Storch – Chana bas Avraham Pesach – in continuing her mission to fulfill the needs of our community and klal yisrael, and may the Storch family find comfort in the beautiful legacy she leaves behind.