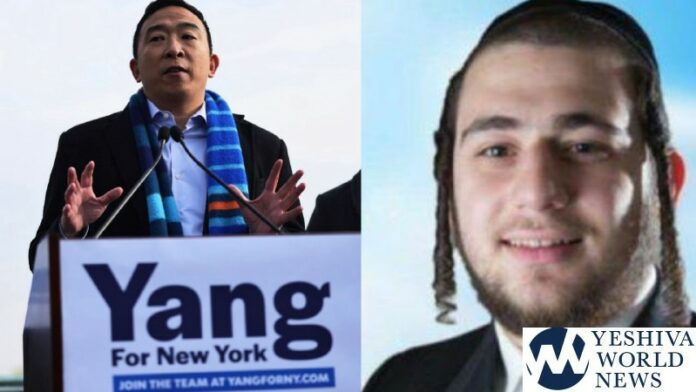 Schwartz, a Democratic District Leader for New York State’s 48th Assembly District, is also First Vice Chair to the Brooklyn Democratic County Committee, one of the largest Democratic committees in the country. In 2016, Schwartz became Brooklyn’s youngest District Leader after winning his election, running on a platform of getting more residents more politically engaged and building diverse coalitions within the borough.

Schwartz has also been a strong voice against all hate crimes and for speaking out against anti-Semitism – priorities for a Yang administration.

“I’m incredibly excited to join Andrew Yang’s campaign for mayor. Andrew has proven himself to be an innovative leader, a uniter, and friend of the Jewish community. It’s refreshing to have a candidate proudly standing up for what’s right and who is supportive of all the issues so dear to us,” said David Schwartz.

Said Joel Rosenfeld, Director of Government affairs for Bobov Community, “I have known David since he ran for District Leader, David is a great, young energetic community leader. The Yang campaign made a great pick by appointing David as The Jewish Outreach Director. I am looking forward to work with David as the Yang campaign continues to articulate their policies that will affect the quality of life for every New Yorker and the Jewish community in particular.”

“I am honored to have David Schwartz join our growing, diverse team,” said Andrew Yang. “David has been a strong voice, advocating for the rights of the Jewish community and for building bridges to bring people together. I look forward to working with David on the challenges facing New York’s Jewish community and finding solutions for how we can all move forward together.”

Andrew Yang has centered his campaign on tackling the City’s multiple crises at a time when the status quo has failed to bridge divides between communities, address the 40% of New Yorkers who live below or at the poverty line, build an education system that is outcomes-based, and stand for all New Yorkers.