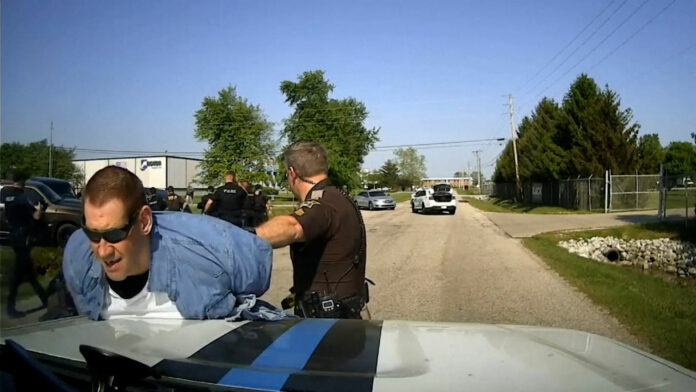 Alabama murder suspect Casey White has been interviewed extensively since he was apprehended on Monday, ending an 11-day, multistate manhunt, and is cooperating with the investigation, authorities said.

Escaped inmate Casey White had spent about one week in Evansville, Indiana, where he was taken into custody, Vanderburgh County Sheriff Dave Wedding said at a news conference Tuesday. Footage from a police vehicle captured his arrest.

Casey White, 38, and his accomplice, Lauderdale County Assistant Director of Corrections Vicky White, 56, stopped in Evansville to figure out their next place to travel, the sheriff said.

The sheriff said Casey White admitted they were trying to “find a place to hide out and lay low,” and that he paid for a 14-day stay at an Evansville hotel.

They had multiple wigs, the sheriff said.

After the pair was spotted at the Evansville hotel on Monday, they led police on a car chase in a Cadillac, Wedding said.

Authorities rammed the Whites’ car and pushed it into a ditch, Wedding said. Had police not done that, he said, “the fugitive” admitted he planned to get into a shootout with law enforcement. The sheriff praised law enforcement’s actions for possibly saving lives.

Wedding said police found an AR-15 and several handguns in the vehicle after it crashed.

The crash ended in a wreck. Bodycam footage showed officers pulling her from the car.

Vicky White was hospitalized for injuries from an apparent self-inflicted gunshot wound, officials said. She died at a hospital Monday night.

“When we were taking Casey White into custody, upon his surrender he said, ‘Help my wife, she just shot herself,'” Commander Deputy U.S. Marshal Chad Hunt told ABC News’ “Good Morning America” on Tuesday.

Hunt said there’s no evidence to show that the two were married.

An autopsy is set for Tuesday.

The manhunt began on April 29 when Casey White and Vicky White, who are not related, fled the Lauderdale County Jail in Florence, Alabama. Authorities said they believe Vicky White willingly participated in the escape, which took place on her last day before retirement.