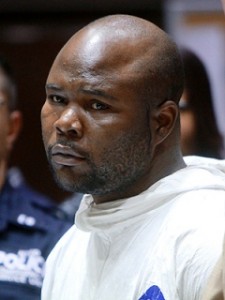 At approximately 2:15 am on December 12, 2011, Officers Peter J. Figoski and his partner were responding to a robbery in the Cypress Hills section of Brooklyn.

According to the indictment, Lamont Pride, 27, while trying to escape, shot Officer Figoski in the face. Officer Figoski died five hours later at Jamaica Hospital Medical Center. Pride was indicted for Murder in the First Degree, Aggravated Murder, Murder in the Second Degree and Criminal Possession of a weapon in the Second Degree. If convicted, he faces life in prison without parole.

According to the indictment, four others participated in the robbery with Pride. Kevin Santos, 30; Ariel Tejada, 22; Nelson Moralez, 27, and Michael Velez, 21, are charged with Murder in the Second Degree and Criminal Possession of a Weapon in the Second Degree.  If convicted, they face 25 years to life in prison.

The case is being prosecuted by Kenneth Taub, Chief of the Homicide Division, and Assistant District Attorney Howard Jackson.