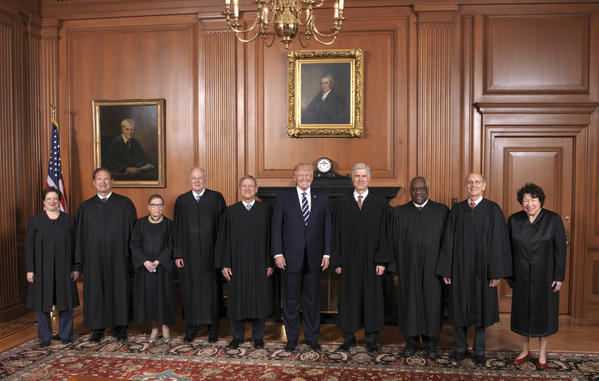 The Supreme Court enters its final week of work before a long summer hiatus with action expected on the Trump administration’s travel ban and a decision due in a separation of church and state case that arises from a Missouri church playground.

The biggest news of all, though, would be if Justice Anthony Kennedy were to use the court’s last public session on Monday to announce his retirement.

To be sure, Kennedy has given no public sign that he will retire this year and give President Donald Trump his second high court pick in the first months of his administration. Kennedy’s departure would allow conservatives to take firm control of the court.

But Kennedy turns 81 next month and has been on the court for nearly 30 years. Several of his former law clerks have said they think he is contemplating stepping down in the next year or so. Kennedy and his clerks were gathering over the weekend for a reunion that was pushed up a year and helped spark talk he might be leaving the court.

When the justices take the bench Monday, they are expected to decide the case of Trinity Lutheran Church of Columbia, Missouri, which was excluded from a state grant program to pay for soft surfaces on playgrounds run by not-for-profit groups. The case is being closely watched by advocates of school vouchers, who hope the court will make it easier to use state money to pay for private, religious schooling in states that now prohibit it.

Missouri has since changed its policy under Republican Gov. Eric Greitens so that churches may now apply for the money.

Also expected in the next few days, though there’s no deadline by which the court must decide, is a ruling on whether to allow the administration to immediately enforce a 90-day ban on visitors from six mostly Muslim countries.

In all, six cases that were argued between November and April remain undecided. Three of those, all involving immigrants or foreigners, were heard by an eight-justice court, before Gorsuch joined the bench in April.

If the eight justices are evenly divided, those cases could be argued a second time in the fall, with Gorsuch available to provide the tie-breaking vote.