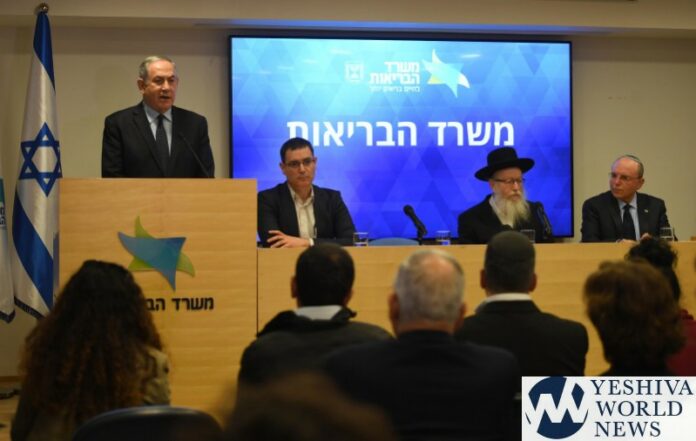 Prime Minister Binyamin Netanyahu spoke at a press conference on Wednesday afternoon about the coronavirus situation in Israel, which has become much more serious following the diagnosis of a high school student who attended a crowded soccer game before being diagnosed and the vice principal of an elementary school who also taught 5th grade. The 1,150 students in the high school and thousands of soccer fans who attended the game were instructed to self-quarantine on Wednesday.

A staggering 100,000 Israelis are in quarantine at the moment, and the situation does not look like it is slowing down anytime soon.

Following an emergency meeting with senior Health Ministry officials on Wednesday afternoon, a press conference was held at which Netanyahu said: “We have to call it like it is, we are amidst a global pandemic, the worst in the past century.”

Netanyahu also repeated what he said at previous conferences, that Israel prefers to be over-prepared rather than underprepared and therefore the government is implementing strict measures, including banning entry to foreign nationals from France, Germany, Austria, Switzerland and Spain. Israelis returning from these countries will now have to self-quarantine.

There were reports that the United States would be on the list as well but Netanyahu did not mention the US. Netanyahu also asked people to remain from shaking hands. 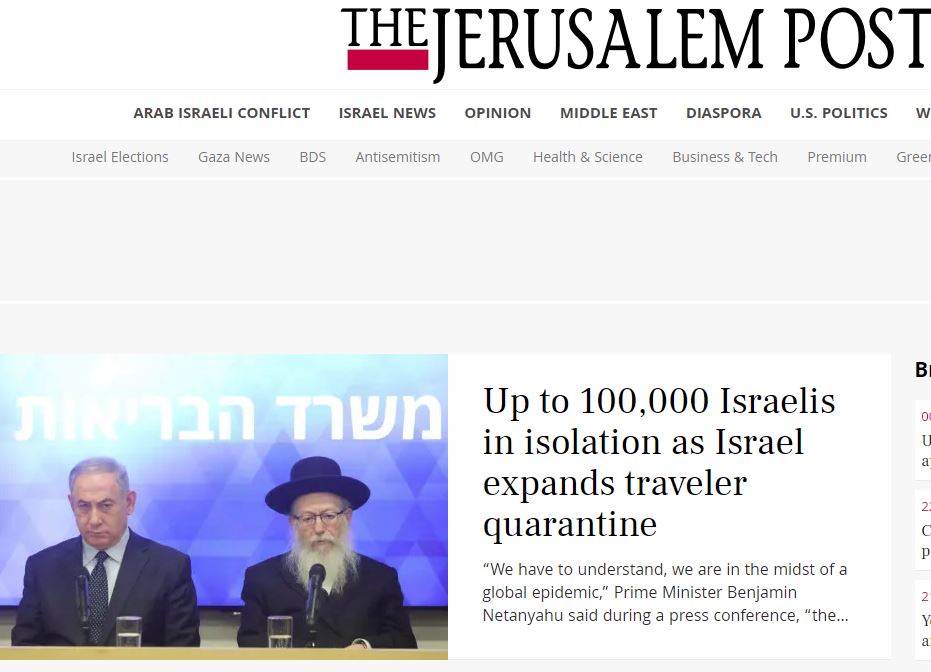 Health Minister Yaakov Litzman spoke briefly at the conference and said that gatherings of over 5,000 people are currently forbidden and international conferences are now banned in Israel.

The new protocols issued by the Health Ministry in an effort to curb the spread of the Coronavirus include a prohibition to hold large gatherings of 5,000 people or more. This new rule has subsequently caused numerous cities to cancel their Purim celebrations.

In Holon, the major Ad-De-Lo-Yada event was canceled. The event is a mainstay of the Israeli cultural scene on Purim. Other cities that have canceled their official Purim celebration include Karmiel, Givatayim and Herzliya.

Additionally, more than 150 El Al staff, including pilots and flight attendants, were put into quarantine in their homes in light of the new Health Ministry guidelines stating that anyone who visited a number of European countries (Germany, Spain, Italy, as well as others) within the last 14 days, needs to go into home quarantine.

A significant portion of those requiring quarantine are pilots who work in the service of the company.

A Health Ministry statement following the conference specified the steps that Israel is implementing to protect Israeli citizens from the coronavirus.

1. Israelis returning from France, Germany, Switzerland, Spain and Austria will be required to self-quarantine and the instructions apply retroactively from the day of departure.
2. Non-Israeli citizens from these countries will not be allowed to enter Israel unless they prove they have the ability to self-quarantine. Implementation of this decision will take effect in the coming days.
3. There is a comprehensive ban on holding international conferences in Israel.
4. Residents of Israel returning from international conferences abroad will be required to self-quarantine for 14 days.
5. Health care workers are banned from going abroad.
6. Mass events and gatherings of over 5,000 people are banned.
7. People who returned from any destination abroad are forbidden to participate in gatherings of over 100 people for 14 days.
8. It is recommended that the Civil Service Commissioner [responsible for managing government employees] ban employees from traveling abroad.
9. It is recommended that those aged 60 and over and those with chronic illnesses such as heart disease, diabetes, hypertension, respiratory disease and immunosuppression avoid gatherings and contact with people returning from any destination abroad or people with symptoms or people suspected of being ill.
10. Tourists who were in Iran, Iraq, Syria, Lebanon (in the last 14 days) will not be allowed to enter the country.
11. The Health Ministry recommends to practice strict hygiene and avoid handshakes.

Israel’s Airports Authority stated that a total of 19 flights are slated to land in Israel by midnight from the above-mentioned countries – 7 from Germany, 5 from France, 4 from Austria, 2 from Spain and 1 from Switzerland. All Israelis on the flights will be required to self-quarantine for two weeks.

Meanwhile, Magen Dovid Adom’s hotline has been overloaded with calls about COVID-19, prompting MDA to instruct Israelis to call 101 only in case of a fever, a cough or breathing difficulties. All other inquiries, including questions about self-quarantine, should be directed to the Health Ministry hotline at 5400 or the Health Ministry website.