Amid the pain and suffering of Ukrainian Jews fleeing from the war front came a moving story on Tuesday that symbolized the continuation of life amid travails – a Jewish toddler entered the bris of Avraham Avinu.

The mother, a Jewish refugee from Kharkiv, was not connected to the Jewish kehilla in Kharkiv and was not interested in a bris milah when her son was born. But when she arrived in Kishinev and saw the special welcome that the Jewish community showed to every Jew, she decided that she wanted her son, now two and a half, to have a bris.

She turned to Rav Mendy Axelrod, a Chabad Rav in the city who serves as the Rav of the shul in Kishinev and is involved in the reception of Jewish refugees to Moldova, and requested that he arrange a bris for her son as soon as possible.

It turned out that there was no need to search for an expert mohel who could perform a bris on a toddler, because right there in Kishinev was another Ukrainian refugee – HaRav Yaakov Geisinovich, formerly of Dnipro, who is considered the most experienced mohel in countries of the former Soviet Union and normally performs over 500 brissos every year throughout Ukraine and Russia.

The bris was performed on Tuesday morning in the Mother and Baby Center in Kishinev, where one of the Jewish women of the kehilla works. The toddler was named Chaim Shalom Yoel. 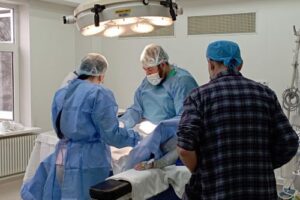 Rav Zusha Abelsky, head of the community in Moldova, said: “At the request of the mother, she and her family members will remain in Kishinev for the next month in order to recover from their flight from Ukraine and the bris. Chaim was enrolled in a Chabad gan in Kishinev and b’ezras Hashem he will start there next week together with the children of other refugees.”

“This bris and the entry of the child into the bris of Avraham Avinu gave us koach in our difficult activities in the rescue of the continuous stream of Jewish refugees.”