A terrible tragedy occurred in Israel on Wednesday evening when a six-year-old boy was killed in an accident on Highway 60 near the Ma’ale Levona junction in Binyamin.

The accident occurred when a Palestinian Arab driver crossed into the opposite lane and collided head-on with the Zinmans’ car with great force.

The mother, Rivka Zinman, said from her hospital bed in Hadassah Ein Kerem Hospital that the accident was a terror attack, that the Arab driver intentionally smashed into her car.

“The road was clear, even in the opposite lane,” she said. “The driver saw me and accelerated at a sharp angle toward me. My son was murdered in a deliberate accident. I was fully conscious the whole time and I saw exactly what happened.”

The police, who are meanwhile treating the collision as a car accident, have not yet addressed the mother’s claims, which she also voiced on Wednesday night shortly after the disaster. The Arab female driver is in serious condition in the hospital and cannot yet be interrogated about the accident.

Whether it was a terror attack or not, Jewish residents of Yehudah and Shomron have warned for years about the lack of police enforcement on the roads against reckless driving by Arabs, who are the cause of a disproportionately high number of car accidents. The residents of Binyamin are holding a protest at intersections along Highway 60 against Arab lawlessness on Thursday evening.

One local resident wrote on social media: “I’ve lived and driven on the roads of Yehudah and Shomron for 18 years. No one should dare say that I’m racist. The Arabs disregard human lives – ours and theirs. There are truck drivers who use the roads to try to murder Jews. I’ve experienced drivers trying to push me off the road – blinding me, overtaking and pushing me to the shoulders, playing on the road like a computer game. Roads in India are safer. Murderers!”

Social media users confirmed her words, with one responding: “What happens here on the roads is Russian roulette…murderers is the right term.”

Below are photos of just a few victims of Arab lawlessness on the roads: 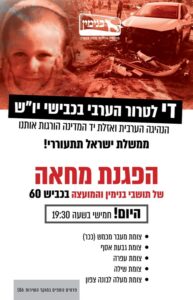