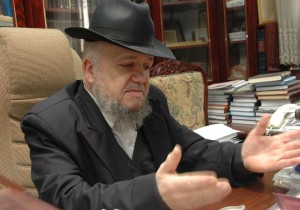 HaGaon HaRav Meir Mazuz Shlita is scheduled on Wednesday 8 Shevat to meet with HaGaon HaRav Tzvi Tau Shlita in an effort to prevent a total disconnect between Dr. Michael Ben-Ari and the Yachad party.

The meeting follows a declaration by Ben-Ari that he will be running alone, not with Yishai. It appears the talks collapsed over two main issues; visiting Har Habayis and Ben-Ari’s number on the lineup.

Rav Mazuz is also expected to release a statement making his position on Har Habayis very clear, that one may not visit in line with the piskei halacha of Gedolei Hador over the generations, as well as the Chief Rabbinate of Israel. Kikar Shabbos reports that if the two parties do unite, Ben-Ari will be switched by Baruch Marzel as per Rabbi Mazuz’s request.

When talks between the parties broke off, Ben-Ari blamed Yachad’s Yoni Chetboun. The latter has since received threats and he is now among the growing number of Members of Knesset with a bodyguard, as per Knesset security officials.

Chetboun explains he is working to unite the religious camp and that is his goal. Otzma Yisrael’s Itamar Ben-Givir feels that Chetboun’s claims regarding threats are a “political spin”, blaming Chetboun for the collapse in the talks. Ben-Givir stated Chetboun wanted him to sign an untenable document, including a commitment not to visit Har Habayis. “There is a concerted effort to embarrass us ideologically” stated Ben-Givir.

Officials from Otzma Yehudit add that HaGaon HaRav Dov Lior have instructed them not to compromise on ideals, especially Har Habayis, and to submit their own independent list to the Central Election Committee and run without combining with Yachad. Rav Lior is a leading rabbinical figure supporting visiting Har Habayis in compliance with halacha.