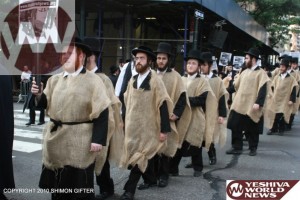 Thousands of Orthodox Jews are targeting Israeli Prime Minister Benjamin Netanyahu during his visit to Washington, DC, demanding Netanyahu to stop Archaeological excavations and construction in the Holy Land that is desecrating ancient Jewish cemeteries in gross violation of Jewish law. The leaders also denounced the Israeli police’s beatings of peaceful demonstrators protesting the clearing of five ancient cemeteries and continued action to empty a cemetery in Jaffa in order to construct a hotel.

Rabbi Lazar Stern, a spokesman for Asra Kadisha, a worldwide group dedicated to protecting the integrity of Jewish cemeteries, said the leaders plan to protest outside the White House, and to deliver petitions to the Israeli embassy, during Netanyahu’s July 6th visit

The Central Rabbinical Congress, which represents Orthodox Jewry, helped organize the day of protest in Washington in support of Asra Kadisha.

“We believe that the desecration of the dead could bring grave danger to the living,” said Rabbi Stern.

Asra Kadisha has brought international pressure to bear in their efforts to stop the desecration of cemeteries throughout Europe – most recently in Spain, the Czech Republic and the Ukraine – and finds it unbearable painful that similar desecration’s are taking place in the Holy Land.

Dr. Bernard Fryshman, of the Conference of Academicians for the Protection of Jewish Cemeteries, reported that suitable engineering alternative had been provided to all of the burial sites recently excavated in Ashkalon, Nazareth and now in Jaffo.

“For a Jew to desecrate the cemetery of a Jew is shocking,” said Fryshman. “It’s time for the Israelis and the Americans to step in and stop this desecration and stop the beatings of those who have risen up in righteous protest.”

Rabbi Dovid Schmidl, head of Asra Kadisha, described lengthy negotiations attempts with the Elektra Company & RFR Reality, key investors in the developments on the sites of the excavated graves.

“They refused many practical alternatives to enable the protection of the graves. We never had a similar situation of so many cemeteries being blatantly desecrated,” he said.

Rabbi Lazar Stern, speaking from New York described the use of tear gas against octogenarian Rabbis and Sages a characteristic of some of the world’s most repressive regimes.

“There is no other civilized nation in the world which permits the brutal excavation of ancient cemeteries, nor is there anyone else that would use tear gas against leading Rabbis like the members of the B’DATZ.”

Plans call for a delegation of Orthodox leaders to go to the Israeli embassy at 1 PM to deliver a petition signed by 50,000 Orthodox Jews calling on the government to stop the continued clearing and desecration of the cemeteries.

The leaders will then join an anticipated 2,500 others in a march at the White House, where Netanyahu will be meeting with President Obama.

Then, a delegation will deliver to the State Department a petition to Secretary of State Hillary Clinton asking her to intercede in calling for an end to the cemetery desecration’s, in line with the dictates of the United States Commission for the Preservation of America’s Heritage Abroad which has lent its voice in support of efforts to stop similar desecration’s around the world.

That petition to be delivered to the State Department urges the department to raise “a voice of conscience” against the immoral campaign by the Israeli authorities to physically crush all voices of opposition to the equally wrong uprooting of centuries-old Jewish burial sites.

NOTE: Satmar of Kiryas Yoel, under the leadership of the Rebbe, Rav Aron Tietlebaum Shlita led a protest in Manhattan in early June. Click HERE for that story, photos & videos.