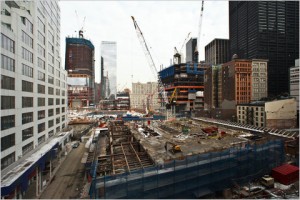 Within a month, it should be down to zero; the last and largest of the 9/11 structural remnants to be cleared away, almost a full decade after it was seriously damaged in the attack and six years after the first of many promised completion dates.

The deconstruction project has spanned the administration of four governors, resulted in the death of two firefighters, cost nearly $160 million, riveted neighbors with fear of asbestos or other contaminants, revealed partial human remains from 9/11, darkened surrounding streets with tunnel-like sidewalk sheds and delayed progress on the overall redevelopment of the trade center, just across Liberty Street.

The building will never disappear entirely, because its foundation walls and steel columns will remain, hidden below street level. They might even be used in some way to support whatever structure goes there next.

The Port Authority will take over the site after deconstruction is complete, and use it as a staging area for the vehicle security center being built beneath the trade center. As to future development, the authority said in a statement: “Whether it is office, retail, hotel, residential or some mix of those uses, that development should be market driven to ensure its highest and best use.”