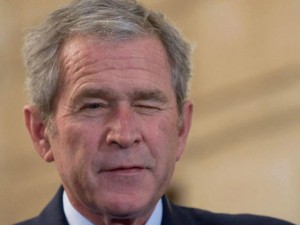 A visit by former President George W. Bush to Switzerland this week has been canceled because of security concerns, as the threat of mass protests loomed and the possibility emerged of a legal case against him for ordering torture.

Mr. Bush was informed Friday by the charity he planned to address in Geneva, the United Israel Appeal, that his Feb. 12 dinner speech had been called off, said his spokesman, David Sherzer.

“We regret that the speech has been canceled,” Mr. Sherzer said by e-mail on Saturday. “President Bush was looking forward to speaking about freedom and offering reflections from his time in office.”

Mr. Sherzer declined to comment on the reasons for the cancellation.

The Swiss daily newspaper Tribune de Genève reported Saturday that the charity feared that protests against Mr. Bush planned by left-wing groups could result in violence.

“The calls to demonstrate were sliding into dangerous terrain,” the charity’s lawyer, Robert Equey, told the newspaper. “The organizers claimed to be able to maintain order, but warned they could not be held responsible for any outbursts.”

Protest organizers had called for participants to each bring a shoe to the rally outside the lakeside Hotel Wilson where the dinner was to be held. The shoe was meant to recall the one an Iraqi journalist threw at Mr. Bush during a news conference in 2008.

Mr. Equey said that efforts by human rights groups to submit legal complaints against Mr. Bush to Swiss prosecutors had not played a part in the decision to cancel the visit.

Several human rights groups including Amnesty International and the New York-based Center for Constitutional Rights had planned to ask Swiss prosecutors to open a criminal investigation against Mr. Bush over the admission in his recent memoirs that he personally authorized the waterboarding of terrorism suspects.

“Whatever Bush or his hosts say, we have no doubt he canceled his trip to avoid our case,” the Center for Constitutional Rights and others said in a statement.

Legal experts say it is unlikely that Swiss prosecutors would have had the time to examine any criminal complaint against Mr. Bush and take action before he left Switzerland again.