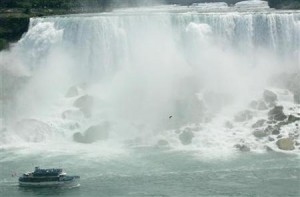 New York lawmakers on Wednesday gave final approval to a bid by daredevil Nik Wallenda to cross Niagara Falls on a tightrope.

Such stunts at the falls, which form the border between western New York and Canada, are banned by state law, but supporters of the measure said it would boost tourism in the depressed area and cited Wallenda’s considerable experience to soothe concerns about safety.

“Tourism in Niagara Falls has declined on the American side, as the Falls was separated from its daredevil history,” the bill’s sponsors wrote in a memo.

“Mr. Wallenda is uniquely qualified for this feat, as he is the holder of two world records for high wire performance,” they added.

According to his website, nikwallenda.com, he set world records in 2008 in Newark, New Jersey, for both the longest distance and greatest height ever traveled by bicycle on a high wire.

Wallenda was not immediately available for comment. The stunt will likely be filmed this fall for his new Discovery Channel show “Life on a Wire.”

Wallenda is a seventh-generation daredevil hailing from the family of “Flying Wallendas” that performed at Ringling Brothers and Barnum & Bailey circus since 1905.

Jean Francois Gravelot, a French acrobat better known as “The Great Blondin,” made the 1,100-foot trip across the falls nine times beginning in 1859, adding increasingly difficult obstacles during each bid.

In one instance, he carried his manager on his back. No one has crossed the falls since 1910.

Not everyone is thrilled about Wallenda’s walk. Niagara Falls historian Paul Gromosiak told the Buffalo News the stunt would turn the falls, which are the largest in North America, into a “commercialized sideshow.”

The bill still must be signed by Governor Andrew Cuomo to become law. His office declined to comment on the legislation.