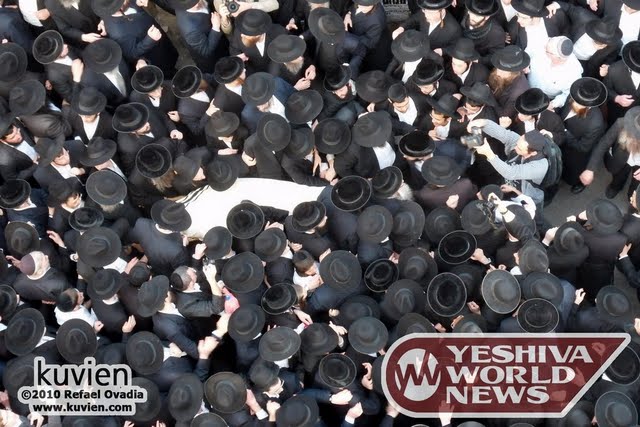 [VIDEO & PHOTO LINKS POSTED BELOW] Thousands were on hand on Monday afternoon to pay their last respects to R’ Menachem Porush z”l, who was niftar on Sunday night at the age of 94. For many; simply folks, avreichim, rabbonim, admorim and politicians, R’ Porush exemplified the concept of being a “Yerushalmi’, as well as a person who was constantly concerned with the welfare of others, giving of himself for the Holy City his entire life.

Many prominent personalities were on hand, including President Shimon Peres, the Belzer Rebbe Shlita, and Rav Shmuel Auerbach Shlita. The Erlau Rebbe Shlita, who was extremely close, gave a hesped, as did his son R’ Meir, the deputy minister of education, who delivered heart-rending words. R’ Meir himself cried, speaking of his father’s activities for some 60 years, always giving of himself on behalf of Am Yisrael, Eretz Yisrael and Toras Yisrael.

Prime Minister Binyamin Netanyahu also eulogized the niftar in a statement, calling him “a pillar of the chareidi community. Israel and the Jewish people have lost a dear, wise and warm Jew who loved Israel and was among the best public servants we had.”

As the niftar requested, he was interred with thirty tapes of daf yomi in Har Menuchos.